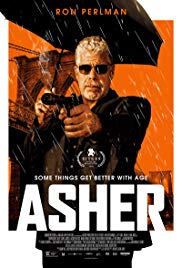 An aging hitman's last job goes sideways, forcing him to redeem himself.

I just killed a man in the bathroom, and I’m afraid if we don’t leave right now,

Men will say anything for sex.

A hitman who, by chance, encounters a lovely dance teacher and realizes that it’s time to turn his back on his dangerous profession. And then he comes to the conclusion that it’s not so obvious to do that. Well, doesn’t it sound familiar to you? It’s a bit like “Polar“, the “John Wick” -like action thriller, but with considerably fewer action scenes. The way Asher (Ron Perlman) enjoys a carefully cooked meal and a glass of wine on his rooftop terrace while observing the nocturnal activities in the city, is a snapshot that perfectly reflects how the rest of the film feels. You’ll get that easy-going feeling the entire film. So don’t expect an impressive and magically choreographed action film. The fact that one of the targets who Asher had to liquidate, drops dead because of a heart attack before Asher does anything, is telling. Not that the film is deadly boring. But it’s not energetic either.

Perlman is perfect to play Asher.

In my opinion, Ron Perlman really was the most suitable person to play Asher. This impressive-looking actor with his characteristic facial features exudes a kind of calmness and is at the same time intimidating enough. Ron Perlman, better known as “Hellboy” but also known for his contributions to an infinite number of other films, delivers a suitable interpretation. Maybe his age has something to do with it. As a 70-year-old, he does not have to put a lot of effort into playing an almost retired killer. A grayish, tough guy who suddenly starts to notice that his shape is deteriorating. When the lovely Sophie (Famke Janssen) crosses his path, he suddenly realizes that being lonely at an old age isn’t something he’s looking forward to. In any case, it’s a role that demands more than just brute force. And Perlman, who in my eyes looks very much like Thanos, knows perfectly how to keep the balance between the professional, experienced assassin and the old, somewhat gloomy man who realizes that his career is over and that the younger generation will soon take over.

A timid and stressed young woman.

Famke Janssen, who immigrated from the Netherlands to the US and played in blockbusters such as “Taken” and “X-men“, isn’t playing her most impressive role here but still manages to portray the person Sophie in an excellent way. A timid and stressed young woman with a turbulent past and dealing with her own personal problems. It’s mainly her dementing mother Dora (Jacqueline Bisset) she’s worried about. The old woman no longer recognizes her and sometimes responds in a sharp and angry manner. This ensures emotionally charged scenes. And in one way or another, it’s also the reason for an unconsciously funny moment. For me, the conversation between Asher and Sophie about putting Dora out of her misery was the most moving and at the same time funniest moment of the film. An exchange of ideas on how to accomplish this while Sophie has no idea what Asher is actually doing. Let’s say, a tragicomic moment.

The acting wasn’t bad. On the contrary.

“Asher” is a mediocre crime movie that has difficulties getting off the starting blocks. And even when it gains momentum, the pace still seems to be slow and the film still colors nicely within the lines. This time it’s not about bad acting but rather the actionless content. They focus more on the development of a close relationship between two lonely souls. For me, this was enough to call it an interesting film. Even though the subject itself isn’t groundbreaking and some things are bluntly idiotic. For example, I found the corridor scenes in which Asher stood there with his umbrella while the fire alarm went off, completely ridiculous. I thought it was odd that only the targeted person runs out of his apartment in a panic. So, the movie isn’t a high flyer, but if you come across it somewhere on a VOD service, you might still be able to give it a chance.