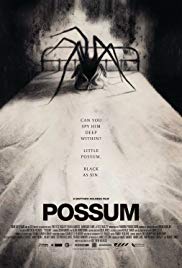 After returning to his childhood home, a disgraced children's puppeteer is forced to confront his wicked stepfather and the secrets that have tortured his entire life.

“Possum” is a British Psychological horror. This movie is a quintessential English movie, paying homage to the disturbing and creepy decade of the 70s. The film is set in the Norfolk area, portraying a landscape that is bleak, desolate and unforgiving. Especially after the holidaymakers return to their homes. The movie itself includes two of the finest British actors. Namely Sean Harris (“Prometheus” and “The Borgias” series) and Alun Armstrong (“Penny Dreadful” series and “Patriot Games“).

Harris plays a disturbed puppeteer who returns home after a scandal, carrying a homemade grotesque puppet called “Possum“. The movie isn’t about jump scares or gory special effects. It’s more a demonstration of fear, paranoia, and despair. The music score is a throwback to the late 1970s. It’s spine chilling and draws in the viewers. The movie is inspired by the biggest sex scandal in the UK involving Jimmy Savile. This movie is very thought-provoking. And be warned. It’s extremely bleak.