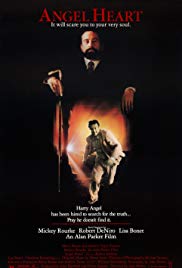 A private investigator is hired by a man who calls himself Louis Cyphre to track down a singer named Johnny Favorite. But the investigation takes an unexpected and somber turn.

Today I’m reviewing the cult classic and controversial film “Angel Heart“. For those who are a film noir or an occult fan, this film ticks all the boxes. Let’s start with the main roles. Two of Hollywood’s heavyweights: Robert De Niro and Mickey Rourke. Personally I thought both performances were outstanding and utterly flawless. Directed by the talented Alan Parker (“Fame“, “Evita” and “Midnight Express“). The musical score is haunting with sinister undertones.

The movie’s set in the 1950s, when private detective Harry Angel, played by the dazzling Mickey Rourke, is being hired by the sinister Louis Cyphre (Robert De Niro) to locate the missing crooner Johnny Favorite. A routine case for Angel, but soon he’s drawn into a world of the occult and New Orleans high society. As soon as the film starts, you are hooked by a sense of foreboding dread which is lurking deep in the protagonist’s fragile mind. Why this film wasn’t nominated for awards, is still a mystery to me and a real shame. It’s “Rosemary’s’ baby” meets “The Maltese falcon” with plenty of voodoo and explicit sex scenes. I rate this film 5/5. It will leave a haunting impression on your psyche.