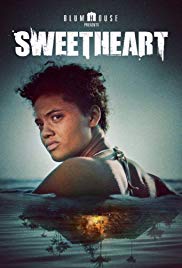 Jenn has washed ashore a small tropical island and it doesn't take her long to realize she's completely alone. She must spend her days not only surviving the elements, but must also fend off the malevolent force that comes out each night.

Let me first make a comment before I start spitting my opinion about “Sweetheart“. How the hell did this kid succeed in reaching the beach of this exotic island? I’m sure that after a few minutes of floating around in the ocean, she’d go down like a stone. That’s not entirely true, of course. Because, when I remember correctly, she was wearing a life jacket (with a backpack over it). I just wanted to point out that she had the most disastrous-looking swimming technique I’ve ever seen in my life. And the fact that not all tropical islands were used in commercials about “Bounty”, but are also the territory of evil, dark creatures from the ocean. And since shipwrecks don’t wash up on this island regularly, the creature was presumably on a fish diet before it could drag some human meat to his hole in the ocean once again. But this aside. “Sweetheart” is a fairly simple story about surviving.

Not an amorous fish friend.

Take the well-known story of “Robinson Crusoe” and mix it with the story from “Cold Skin” and you’ll get “Sweetheart” as a result. The difference with the Crusoe story is the key player. Here it’s someone of the female gender who’s being washed ashore on a beach. And also, she isn’t joined by a friendly native (such as Friday) but a scaly and life-threatening sea monster. And no, this ocean dweller doesn’t have the same amorous intentions as our gilled friend from “The shape of water“. In that case, the film would have gotten a more frivolous character and our survivor’s stay would have been much more enjoyable.

What to do when you arrive on an island.

Unfortunately, this film doesn’t have much to offer. Actually, as much as Jenn (Kiersey Clemons) was wearing when she woke up there in the saltwater, feeling beach sand scraping between her toes. Nothing much. Only short jeans and a t-shirt. Fortunately, her knowledge of survival techniques was abundantly present. Without hesitation, this young lady runs through the checklist of the “Tasks to be performed when you wash up on an uninhabited island” list and starts installing herself on the island as well and as badly as possible. The first part is, therefore, a concatenation of moments where you can see Jenn handling these tasks. Estimating the perimeter of the island, developing hunting techniques, ensure a decent place to spend the night and thoroughly explore the island itself. Only the nocturnal threat was not on the list. Something for which she has to use her own personal inventiveness.

There’s not much talking here.

Most of the film consists of Clemons doing a solo performance. The success or failure of such kinds of films (as in “Mine” for example) is therefore entirely in the hands of that specific person. Should her acting be bad or unbelievable, the film will suffer a figurative shipwreck (how appropriate). Fortunately, that’s not the case here. She acts solidly and is convincing enough. The panic and subsequent calmness seem realistic enough. Eloquence isn’t necessary here either. Most of the time the film is dialogue-free. Well, it’s hard to have in-depth conversations when you’re on an island on your own. And when an inflatable rescue boat appears on the horizon, with Jenn’s friends on board, it briefly creates some tension. Not for you as a viewer but for the participating actors themselves.

Not an exciting movie for me.

What remains is the aquatic creature. Yes, could this monster ensure some tense moments? Unfortunately, the creature is allergic to sunlight. In short, it’s only in pitch darkness (and an uninhabited island without artificial lighting is simply pitch dark) that you can see this rogue (partially). There are nevertheless some successful scenes in the film in which it shows how supreme it is in water. But except for a little growling and hissing, the monster is a bit disappointing. All in all, I didn’t think it was an exciting movie. Since it’s an exotic island, the film is peppered with breathtaking images of beaches and azure blue water. And isn’t that something an average earner can only dream of?