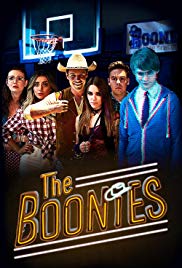 Five seniors who were childhood best friends come together because of a dead classmates video for a million dollar treasure hunt inside Boone high school.


“The Boonies“. You would think it’s a parody of “The Goonies“. Partially it is. Here it’s also about a hidden treasure (a briefcase with $ 1,164,000) which Doug (Calum Worthy) has hidden somewhere at “Boone High School”. A kind of quest devised by him after he died in a terrible way. Killed by bullying fellow students? Or was it someone of his childhood friends? Primary school friends who dropped him like a rock because they became more popular, while Doug was given the status of “nerd”. In any case, this smart, acne-plagued adolescent has come up with a clever plan. An assignment that is sent en masse to all students of “Boone High School”. And of course to “The Boonies” who for once need to put aside their prejudices and disputes and jointly carry out tasks to get hold of the money.

To be honest, the treasure hunt is a side issue. “The Boonies” is about lost friendships and how the school community changes you as an individual. As 10-year-olds Doug, Teddy (Cody Ko), Chuck (Kyle Jones), Holly (Andi Matichak), Stephanie (Lauren Elizabeth) and Elektra (Amymarie Gaertner) were the best buddies. Inseparable friends who founded a club with the original sounding name (sarcastic intonation) “The Boonies“. Now, after many years, they have grown apart and there is an atmosphere of resentment and envy hanging between them. Doug’s wet dream is to bring “The Boonies” together once more and to revive the lost friendship.

The five friends are classic examples of the archetypes that are used over and over again when it’s a High-School movie. Stephanie is the “bitch” of the gang who has a big mouth and wears tight, white hotpants with matching cowboy boots. Such a high-class bimbo who hates everything and everyone. Holly is the brainiac whose cup size probably equals her IQ and whose dramatic outbursts seriously got on my nerves. Teddy is a popular, cool guy. Chuck is the stupid jock who walks around with a giant Stetson all the time. To my surprise, I noticed also that he has a beer belly. Of course, there’s a Goth chick among them as well. And as I mentioned earlier, Doug is the nerd. A dead nerd.

I can be brief and concise about the acting. It felt amateurish and terribly forced at certain moments. But all in all, it was quite funny sometimes. Of course, these well-known American school types are portrayed in a terribly exaggerated way. And they were simply annoying at times. Especially Stephanie’s constant bickering started to bore after a while. And Holly managed to demand the most attention, every time her bobbling boobs came into view. I have to admit I can’t remember much of her dialogues. The gigantic crack of her cleavage, however, is burned into my retinas. So just expect a lot of flat and sexually charged humor. But in some bizarre way, I started to like Chuck’s figure a lot. His immense stupidity and grotesque way of proving his masculinity did work on my laughing muscles. So for me, this Texan dumbnut was the most successful character.

It had its charms.

“The Boonies” is not a high-quality movie. It was as if I was looking at an assignment made by final year students from the Faculty of Art. Or that I was watching a play performed by students at the annual school party. Especially when several actors were grouping together, it seemed rather artificial and everyone was looking a little awkward. Humor also fails in certain areas and appears to be terribly outdated. So if you enjoy watching an old-fashioned “food fight”, you definitely should try this movie. And God, that school food looked disgusting. All in all, it’s a movie I certainly wouldn’t recommend to others. It has its charms and good moments. But the fact that 2017 is the release year on IMDb, already raises questions. Did they put this project on hold for years? Or was there some doubt about releasing this film? I have no idea.