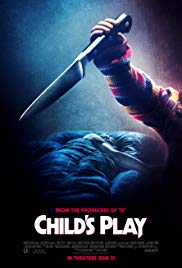 A mother gives her 13-year-old son a toy doll for his birthday, unaware of its more sinister nature.

It seems like a lifetime ago since I saw the original film with the demonic pop Chucky dangerously swinging around with a razor-sharp butcher knife. Well, It’s not a hundred years, but thirty years is a long time as well. That’s how long it’s been since I went to get the VHS of this movie in the local video store. Apparently several sequels have been made after the initial release. Somehow I’ve missed that. Me and sequels. It remains an eternal struggle. Because there wasn’t anything better to choose from and I had nothing to do, I still took the risk and watched this modern version. Apart from the fact that the doll looks slightly different, has been given a different name and the reason for its malicious behavior has changed slightly, it was exactly as if I went back in time. “Child’s Play” has the same 80s horror mood.

But first of all a big compliment to the makers of this pimped version. Most reboots or remakes just seem like a duplicate of the original. Here they really deviate from the original story. It’s not the soul of a serial killer that transforms the doll into a bloodthirsty, diabolical murderous toy. Here it’s an aggrieved and irritated Chinese factory worker who starts to mess with the security software out of revenge. To be honest, I felt like giving up at that moment. A ragged and clearly unkempt Chinese guy reprogramming the source software was, in my eyes, completely absurd and exaggerated. Fortunately, I persisted. Because all in all “Child’s Play” wasn’t so bad.

What disappointed me a bit, was the doll itself. Especially the transformation from good to evil. In the original film, Chucky did get a diabolical and cruel expression. In this movie, they wanted to achieve the same effect by providing Buddi (as this child-friendly babysitter is now called) with red-glowing eyes. Well, it wasn’t really scary. And to be honest, this film isn’t creepy at all. I thought it was rather entertaining horror material, suitable for the novice horror enthusiast. Don’t expect any nasty-looking killings either. You’ll see clichéd situations where circular saws and a lawnmower (or something like that) are used in. The favorite murder instruments from the 80s.

The acting was generally acceptable. Only Aubrey Plaza as Andy’s mother wasn’t really convincing. To be honest, she seemed to be the sister of Andy (Gabriel Bateman), the introverted boy with a hearing problem. David Lewis played the most annoying character. That means you can say that his acting was successful. The most light-hearted and comical part was provided by Brian Tyree Henry as police officer Mike, who lives with his mother. It’s not only the mother-son correlation that sometimes causes hilarious moments. There are also slapstick-like scenes, such as the gift-wrapped item (Well, I try to stay vague about this) that falls into the hands of Mike’s mother by mistake. Most surprising in this film was the fact that Mark Hamill (Yes, Luke Skywalker himself) was responsible for Chucky’s dialogues.

In the end, this was a creditable attempt to breathe new life into the Chucky franchise. This modernized version is not an epic film but is anything but bad. It even tries to portray a failing A.I. and point out the dangers of a robotic society. And actually, what Chucky is doing, is simply the result of a learning process that he undergoes in the company of Andy. If the latter makes a remark that he would rather get rid of the cat Mickey Rooney, you already know the verdict. In the end, Chucky is nothing more than an electronic gadget that ignores the robotics laws of Asimov. It’s not really impressive or exciting at all. But “Child’s Play” was a nice time-killer.