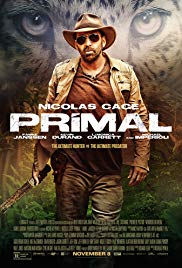 Frank's caught wildlife in the Brazilian jungle incl. a 400 lbs. white jaguar. He ships it on the same ship as an arrested assassin. The assassin breaks free and frees the animals.

I just spent ten months in the jungle,

and this all smells like cat shit to me.

Films where animals mess with the protagonists’ life. There are a lot of those movies. Only recently you could see in “Crawl” how alligators tried to outwit a father and daughter with their immense mouths full of razor-sharp, meat-tearing teeth. In “A quiet place” there were creatures with such a developed hearing that they can locate any human sound and quickly go there to tear the source of the noise to pieces. Birds, dogs, cats, crocodiles, tarantulas, grizzly bears, monkeys, ants, snakes, and sharks. An entire segment of the animal kingdom has already been used. This movie “Primal” immediately reminded me of a movie I saw years ago. Namely “Burning Bright“. In this last film, too, it was a tiger chasing two innocent people. Only it took place in a kind of Pippi-Longstocking-house. In “Primal”, on the other hand, it’s a cargo ship that serves as a hunting ground. And Nicolas Cage is also present. Maybe that’s why it’s worthwhile to give this film a chance.

Nicolas Cage. Man, I admire this actor enormously. He’s a phenomenon. I’m sure he’s aiming to reach a specific goal in his life. And that’s being able to announce on his deathbed that he broke the world record of “Actor with most appearances in feature films“. The man (known for his phenomenal roles in “Leaving Las Vegas” and “Joe“) did his utmost best in recent years. Every year he appeared in no fewer than six films. Of course, they aren’t all masterpieces. But La Cage seems to have an enormous endurance. I think he accepts every offer he gets. Apparently, his love for acting is infinite.

The crucial question you can ask yourself is of course: “Is this movie worth watching or is it completely rubbish?“. Well, the truth is actually somewhere in the middle. When Frank Walsh (Nicolas Cage) embarks on board a container ship, together with a whole load of exotic animals, he soon notices that he’s not the only one with a unique, life-threatening specimen. Frank earns his living by catching exotic animals, which he then resells to the highest bidder. And the white jaguar (“white jag” as Frank repeatedly pronounces) is a lottery ticket for him. A million to one shot and the guarantee he’ll own some real estate in Pine Lake. And suddenly the American authorities show up with a highly dangerous mercenary (Kevin Durand) in chains, a battalion of soldiers armed to the teeth and a personal female doctor (Famke Janssen) to ensure that the mercenary survives the trip. It has something to do with a brain abnormality and atmospheric pressure. A side issue afterward. You can already guess what’s going to happen. Soon Frank realizes he has to use his hunting instincts to hunt both the white jaguar and the perilous Richard Loffler.

The film never really gets exciting. It looks more like a long version of playing “hide and seek”. The accompanying soldiers are systematically liquidated easily. That kind of looked ridiculous. Also, after a certain period, Dr. Ellen Taylor no longer had a real function. Famke Janssen restricts herself to some annoying protests about catching endangered species. She looks like a feministic environmental activist, who’s about to pull up a protest sign with slogans about animal rights. Even the jaguar only managed to convince in the opening scene. Afterward, the jaguar was nothing more than a sneaking shadow. Only the two characters Cage and Durand played, caused some excitement. Kevin Durand managed to play a psychopathic character convincingly. And Cage visibly had fun here. And to be honest, compared to “A score to settle“, “Kill Chain“, and “Running with the devil” (I shamelessly fell asleep while watching this last one), this Cage-B-film isn’t that bad. Are you a Nicolas Cage fan? Well, you can safely add it to your list of “Must See Cage-Movie”.