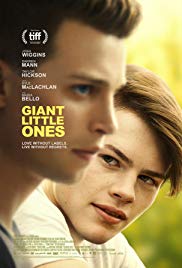 Two popular teen boys, best friends since childhood, discover their lives, families, and girlfriends dramatically upended after an unexpected incident occurs on the night of a 17th birthday party.

It never would have happened

if we weren’t wasted.

Just like in chemistry class at the start of the film, there’s a lot of intense experimenting among the youngsters in this movie. Especially sexually. However, when this experimenting turns out bad for Ballas (Darren Mann), he starts losing his mind. Because it could be detrimental to his reputation as a tough stallion who prefers to brag about the number of times he did it with his girlfriend. His blood brother, friend for life and partner in crime Franky (Josh “Walking Out” Wiggins) suddenly becomes the feared enemy. Franky is treated as a purebred pariah whose proximity causes paranoid reactions. As if he’s the carrier of disgusting STDs. From one day to the next, Franky belongs to the camp of the outcasts in a youth community where popular teens, who measure up to the ideal of beauty, are in charge and seem to lay down the standard rules for acceptance.

“Giant Little Ones” belongs both in the category of “Coming of age” films and the category containing films with a gay/lesbian theme. Now about that last item. The film deals with that topic in a clever way. And this by not explicitly revealing anything about the actual sexual orientation of the persons involved. At the end of the film, we still don’t know whether Franky or Ballas should come out of the proverbial closet. And that makes “Giant Little Ones” a film that feels authentic. As in reality, some people need a lot of time to discover their sexual preferences. The only personage in this film who does this coming-out is Franky’s father (a limited but defining role played by Kyle “Twin Peaks” MacLachlan). A situation that causes conflicting feelings for Franky. On the one hand, there is a love-hate relationship between him and his father. Its the opinion of Franky that Ray has disrupted the ideal family portrait and that he abandoned them. On the other hand, Franky starts to have doubts regarding his sexual orientation. There’s the question of whether or not he has inherited genetic material from his father.

A not so innocent sleepover.

The whole fuss starts when Franky and Ballas go to bed and sleep there together after a hellish birthday party, during which excessive alcohol and probably other mind-altering drugs are consumed. Initially, it all looks like a perfectly normal idea. Two friends sleeping in the same bed. Although, they both are in a questionable state. And all this because the plans Franky had with his so-called girlfriend Priscilla, failed that evening. That’s why they ended up together, instead of fooling around with their girlfriends. Anyway, it’s abundantly clear that their friendship reached a completely different level that evening. Blurred images of someone tossing and turning plus one of the two fleeing the scene early in the morning, are both good indications to back this up. When afterward Ballas takes a distant demeanor (or even better, an aggressive, hostile attitude) and visibly doesn’t want any contact with Franky anymore (and other fellow students as well), you know that shit hit the fan.

Josh Wiggins’ acting is outstanding. A fresh young man who on the one hand effortlessly is invited to the club of popular boys and at the same time has an attitude as if this reputation doesn’t really interest him. Darren Mann also played a convincing role and was the perfect choice to play the role of Ballas. He has a charisma that fits such a guy who makes peers’ lives miserable because they are less fortunate when it comes to appearance and heritage. Such a kid who must uphold his reputation with his fellow confreres and therefor degrades himself to harassment and play that annoying tough-guy routine. And of course, such a person is idolized by members of the opposite sex who practice the same standards. Let’s try and describe such a girl. A blond bimbo with a shockingly low IQ whose sole purpose in life is to open her well-shaped, slender tanned legs wide open as quickly as possible in such a way that this popular jock can get his kicks. A victory for the young lady in question whose reputation goes sky-high among like-minded female souls. And finally, I think Taylor Hickson’s role was the most moving.

Visually, “Giant Little Ones” isn’t really spectacular. But narratively speaking, it’s an excellent, almost brilliant film. The film shows how fake a part of American youth is. A plastic payment card has more character and charisma than most of those mannequins from posh circles. Not only these cartoonish fake persons with their derogatory and homophobic behavior are being presented here. But also those who stay true to themselves, are put in the spotlight. The message “Be yourself” is extensively displayed here. The hilarious lesbo Mouse (Niamh Wilson) in particular loudly proclaims this message by doing things the way she likes it. “Giant Little Ones” has both emotional and funny moments. And what it mainly did, was surprise me. In a positive way, that is.