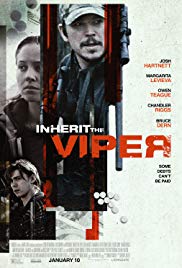 Crime thriller about three siblings in Appalachia getting by as local opioid dealers, trying not to get caught in the spiral of violence that comes with the territory.

Josie… promise me something.

When it’s time to quit, we quit.

Everyone knows the principle of the “American Dream”. The ideal image of a hard-working American who, regardless of his origin, can reach the top through hard work and commitment. “Inherit the Viper” shows the other side of the coin. A film about American citizens who experience the “American Nightmare”. They are part of agglomerations located in remote areas where poverty prevails and survival instinct is a necessity. An additional problem in recent years in the U.S. is the opioid crisis that causes an unprecedented number of victims. This widespread addiction is the Conley family’s important source of income. Apparently they inherited the business from their deceased father. Although, the storyline about what happened to him wasn’t really clear to me.

More a family drama than a crime story.

“Inherit the Viper” is primarily a crime thriller in which the Conley family, consisting of sister Josie (Margarita Levieva) and her two brothers Kip (Josh “Pearl Harbor” Hartnett) and Boots (Owen “IT” Teague), try to make ends meet by running a thriving drug-dealing business somewhere in Appalachia (especially the opioid pills OxyContin) and to sell pills to the locals massively. Even though the subject lends itself to the elaboration of a solid crime story, this film is rather a family drama in which the dynamic between the different family members is central. A family triangle with opposite character traits.

Josie is the tough little cookie from the family whose numbness has reached shocking proportions. Without hesitation, she puts a freshly sold pill back in her pocket that she finds next to the body of an addicted old woman who just died. Self-interest has more priority to her than compassion for a fellow person. Hence the explanation for a later initiative she takes and which shows how numb she is. Kip is an ex-soldier. A hardened and fearless gut-eater who knows the tricks of the trade. Yet he’s the one who would prefer to stop with the family business in order to build a safer future with his heavily pregnant girlfriend. And finally, you have Boots, the benjamin of the family. This impetuous teenager wants nothing more than to get into the family business as quickly as possible. Because this is still being put on hold by brother and especially his sister, it’s Boots who takes an initiative. Unfortunately, things are not going the way he’d hoped.

Not a masterpiece but still fascinating.

“Inherit the Viper” isn’t a masterpiece, but still it fascinates. It’s a gray, dark (literally and figuratively) portrait about despair and how to survive in a run-down and soulless corner in American society. A life without a future that requires the protagonists to make unworthy decisions. No shred of compassion is shown. It’s all about supporting the family. Although you feel the tension constantly and the Conley family is slowly but surely confronted with threatening situations (a police investigation is in progress resulting in an accusing finger pointing at them and revenge-seeking city dwellers who have lost someone thanks to the Conley’s threaten them) there are very few action-rich or criminal scenes. This is largely compensated by the interesting interactions and the realistic appearance of the film. The most colorful role is that of Bruce Dern as the obscure, critically ill bar owner where Josie deals pills. A local character who isn’t amused with the fact that corpses are piling up in his bar and whose metaphorical story actually uncovers the essence of what this film is about. And also it’s an explanation of the film title. Although I am not 100% sure about that either.

The denouement managed to surprise me in a certain way. And I was also pleased to see that Josh Hartnett hasn’t slipped off the grid. If you come across “Inherit the Viper” on a VOD service, I recommend to give it a chance. This dark film is worth a watch.