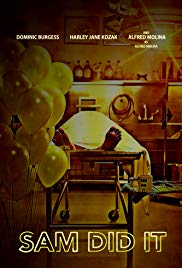 Sam gets the chance to meet his celebrity idol. The only problem is that Sam works in a morgue and his idol is dead.

Sam Did It is a short film directed by British actor and writer Dominic Burgess, who also stars in the film

Occasionally a short film as an in-betweenie is always welcome. Naturally, the short duration (that’s why it’s called a short film) is a huge plus. Also, the fact that one cannot continue to beat around the bush and use an infinite number of subplots to ultimately reach a conclusion also has its advantages. And when the content is also magically conceived, such a short film is really a treat.

And “Sam Did It” is one of the better short films I’ve seen in recent years. Not only because of the acting work of Dominic Burgess as Sam the employee in the mortuary. But also because of the inventive story. And let’s not forget, Alfred Molina (yes, Dr. Octopus in “Spider-man 2“) also plays a part in this sublime short film. He’s playing himself.  Even though his role is fairly dead and lifeless. Not surprisingly. He’s the one Sam discovers on his table in the mortuary. And even better, Sam appears to be the biggest fan of Alfred Molina.

Perhaps you’ve never been confronted with it yourself, but with every mourning process, most people go through five stages to process a traumatic experience (such as the loss of a loved person). I think Dominic Burgess goes through them all here. The euphoria, after seeing his idol on the dissection table, quickly changes into despair, anger, sadness and finally resignation. And the latter phase has disastrous consequences. Dominic Burgess is simply stunning in showing all those states of mind. Phases that’ll either touch you or cause a modest chuckle. You can safely call the scene with the selfies and (of course) the denouement rather hilarious.

All in all, “Sam did it” is highly recommendable. It’s short (extremely suitable as a pre-film) and shows that one can deliver a complete end product with limited resources and budget, but with an excellent concept and priceless idea. Both in terms of structure and imaging, this short film is simply sublime. And also immense respect for Molina who cooperated in this project. In short, a great end result that provides a bit of entertainment.

However, I must conclude with an embarrassing fact. And that’s the fact that the person who asked me in the distant past via a private message to watch this short film, was Dominic Burgess in person. Hereby I want to apologize for this late response. And hopefully, he won’t brief this to Alfred Molina. I will be more alert in the future.