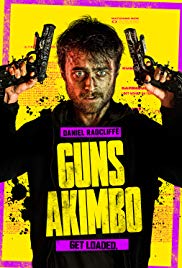 A guy relies on his newly-acquired gladiator skills to save his ex-girlfriend from kidnappers.

I would have shot you in the dick,
if the target wasn’t so small.

“Guns Akimbo” is too absurd for words. It’s absolute nonsense and you shouldn’t take it too seriously. It’s “over the top” pulp and looks as if it’s based on some Asian comic strip. But believe me. This film is simply top-notch entertainment. A roller coaster that slowly takes a very steep run-up and then crashes into the depth with a breakneck-speed, shaking you back and forth. And this crazy, hyperkinetic ride lasts until the end. The action scenes with Nix (Samara Weaving) are equivalent to those in “John Wick“. Flashy editing. Blood splattering when bullets rip apart human flesh in slow motion. And all this under the guidance of an energetic soundtrack where you will hear amongst other “The Ballroom Blitz” from The Sweet. In short, I greatly enjoyed this film for an hour and a half.

Once again respect for the actor Radcliffe.

I have infinite respect for the actor Daniel Radcliffe. This guy could have benefited all his life from the “Harry Potter” stamp that they have tattooed on his forehead. It would have been possible to come up with a few sequels without any problems and without hesitation they could have exploited the success formula of the book series and film versions. He could also have demanded to be part of the “Fantastic Beasts and where to find them” franchise. But no. Instead, Radcliffe opted for not so obvious projects such as “Kill your Darlings“, “Horns” and “Swiss Army Man“. A homosexual-tinted film, full of literary blabbering on the one hand. And on the other hand a film about a friendship between a castaway and a corpse. It’s hard to say that these were commercially safe films that suit the fantasy-loving Harry Potter fans. And to avoid any misunderstanding. I was also enchanted by the Potter films (at least the first four anyway).

Where did these freaking guns come from?

So no magic formulas, mythological creatures and a Radcliffe with a wizard hat showing a boyish, shy smile. Nope, he’s a nobody in this flick. A nobody with a futureless job, who empties one beer bottle after the other while playing violent video games at home. And as a notorious online troll hunter, Miles (Daniel Radcliffe) cannot resist posting derogatory comments on the “Skizm” website and provoking supporters of this obscure platform. “Skizm” is an illegal website that organizes duels in real life where opponents try to eliminate each other. And this is thrown on the internet and followed by hundreds of thousands of fanatic fans and bettors. Obviously, the first movie that came to mind was “Death Match“. The organizer of all this is an ugly tattooed guy called Riktor (Ned Dennehy) who’s obviously completely nuts and is accompanied by a gang of weirdos whose muscle mass is noticeably heavier than the weight of their brains. And Riktor isn’t happy with the muscular language Miles places on his forum. And before the latter realizes it, he lies in bed with two automatic guns bolted to both his hands. And furthermore, he himself is a candidate for a duel between him and Nix.

With this film, Daniel Radcliffe leaves his comfort zone for the umpteenth time and tries to show that he’s more than just Harry Potter. A bushy beard, constantly covered in blood and using a portion of self-mockery and humor, ensure that. Not to mention his clothing: a checkered dressing gown, boxer shorts, and fluffy giant slippers in the shape of tiger claws. For Samara Weaving, this is a little bit an extension of her role in “Ready or Not“. The same bloody and over-the-top situations. But here she got more of a Harley Quinn attitude. A disturbed, fearless person who’s extremely effective in terms of eliminating opponents. That her insane behavior was caused by an incident in her youth is briefly mentioned, but in fact, has no impact or significance. This mindless action film has only one goal in mind and that’s to show chaotic and limitless action. And all this topped with a sauce of humor à la “Deadpool“. There are quite a few hilarious moments in this film. The hand-mounted guns that cause problems for Miles to accomplish daily routines. Like for instance opening a door. Or making a phone call. And peeing is even a hazardous thing to do. The Australian-sounding hobo (Rhys Darby) was simply hilarious with his advice on suicide techniques and his Cypress Hill imitation. How he got Miles in that coat, however, remains a mystery to me.

If you can’t stand a chaotic storyline and you get annoyed when it’s a movie that’s plain predictable and that looks more like an exaggerated comic, then I recommend you avoid this one. Or you don’t take a too critical attitude and you simply undergo the film. Perhaps then you can appreciate the vibrant pace, the screamy images, the creative camera techniques and the complete insane undertone of this movie with a limited budget. “Guns Akimbo” is certainly not a film for everyone because of the video game-like mood and the raw sense of humor. And for those who want to know what the film title actually means: Akimbo is a combat technique in which two weapons are used, with one in each hand. Well, I had to look it up myself.