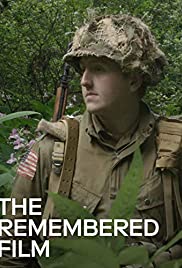 Young soldiers are roaming the forest aimlessly, but something isn't quite right.

Back in 2015, Antwerp-based Isabelle Tollenaere’s feature debut Battles examined what becomes of the traces of war: in peacetime, what happens to the various buildings and objects that were specifically constructed for conflict?  Whether chronicling the various methods of disposing of ordnance or highlighting how a prison camp can be repurposed, Battles nonetheless hinted at the unsettling idea that war – despite what John Lennon might have said – is never really over; rather, we just move to a state where we’re between conflicts, and we learn to live with – and even make inventive use of – what’s been left behind.

Tollenaere’s 2018 short The Remembered Film, which also takes a novel look at war, could quite easily be viewed as a companion piece to Battles.  Opening in a lush green forest, it’s some time before we hear anyone speak – on this basis, you’d be quite forgiven for thinking the film was going to be dialogue-free.  When someone eventually does break the silence, it’s in the surprising form of a young man (quite possibly a teenager) in army fatigues, who speaks directly to the camera as he recounts some details of a conflict he was involved in.  This sets the pattern for the rest of the film as, one by one, a series of similarly-aged men relate their wartime experiences to the camera; quite poignantly, a few of them say nothing at all, but simply stare at the lens.

What is highly unusual about this setup, however, is that judging by their uniforms, these soldiers seem to belong to several different armies: Wehrmacht, American, and Soviet troops all appear to share these woods (although, curiously, all the men have English accents). But what is far stranger is that the soldiers speak about wars that they couldn’t possibly have participated in. While these memories clearly don’t belong to these men, they nonetheless do sound like authentic experiences. From the stories, you do understand that war never really ends – at least not for the men behind these brief monologues who, in the main, remain haunted and disturbed by what they’ve seen.

Shot in a naturalistic, documentary style, The Remembered Film initially proves to be a jarring, slightly disorienting experience, and it takes a few minutes to tune in to what’s actually going on.  Once you do, it’s a satisfying, wistful piece, one which lingers long after its 18 minutes are up.  While none of the soldiers in The Remembered Film are as young as those featured in Monos, Tollenaere’s film would work as an opening short for Alejandro Landes’ nightmarish, hallucinatory tale; while the two films boast very different styles, they do share a special quality, one which taps into the poignancy of the countless young people who have been sent off to war.