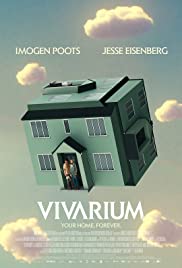 A young couple looking for the perfect home find themselves trapped in a mysterious labyrinth-like neighborhood of identical houses.

Near enough.
And far enough.
Just the right distance.

During this Corona crisis, watching a movie was an impossible task for me. Let alone that I could write down a sensible word to form an opinion. But now three weeks later, the urge to watch a movie once again came back. And I could focus on the movie without my mind wandering off to some disaster scenarios. Apparently, my doom thinking disappeared. And hurray. Even the traditional formulation of an opinion was possible again. Only the choice of film was a bit unfortunate. “Vivarium” isn’t exactly a movie that’ll make you happy. It has many similarities with the situation people in the world are in today. Isolated and tied to one specific living space. No contact with others. And a feeling of powerlessness, fear, and despair. However, it’s not a deadly virus why Gemma (Imogen “Green Room” Poots) and Tom (Jesse “The Social Network” Eisenberg) are in this situation.

Let me warn you first. “Vivarium” isn’t exactly an everyday film. It’s very confusing and probably boring to some. Not only because of the painfully slow pace. But also because of the repetitive character of the film. And mainly, because of the completely surreal and absurd theme of this film. To be honest, from the start I had the feeling that I was looking at a surreal painting by Margritte. Those artificial, unnatural looking perfect clouds against a clear blue sky. The identical row houses in a distasteful green color. Everything looks artificial and unreal. As insignificant and abstract as the name of the neighborhood itself: “Yonder”.

How do we get out of here?

Gemma and Tom, a young couple that wants to settle down and are looking for an affordable home, end up at a real estate agency one day. The eerie-sounding and unworldly-reacting real estate agent invites them to visit a house in a suburb that’s just been built. At first sight a well-kept neighborhood. But at the same time a frightening neighborhood where all houses and gardens look identical. While Gemma and Tom visit the house, with house number 9, they’ve actually made a decision already. While viewing the nursery, bright blue and therefore already intended as a boys’ room, they suddenly realize that the real estate agent Martin (Jonathan Aris) has vanished into thin air. And after a while they discover that they’re not getting out of this maze of identical houses in any way. They have to accept that they are forever trapped in this artificial world.

What an annoying and strange little boy.

From then on, “Vivarium” becomes an uncomfortable film. As a viewer, you feel the despair and watch the youthful and lively couple evolve into an apathetic and indifferent duo whose daily routine consists of eating tasteless astronaut food and caring for a bizarre child. They found the boy at their front door in a cardboard box. Raising this child would be an opportunity to escape, as the message reads on the box. Only this toddler creates a conflict between Gemma and Tom. Not only does the boy’s behavior create tension. Their relationship with this strange little boy is also different. The little fellow seems to be not of this world, as well. His growth pattern isn’t normal. His behavior and way of communicating (he speaks with the voice of Gemma and Tom) are both absurd and annoying. The psychotic shouting until he gets his way would make me go ballistic for sure. And that’s how Tom responds. While Gemma, as a kindergarten teacher, creates a stronger bond with the nasty little boy, Tom reacts hostile and turns to digging a bottomless pit. Probably to find a way out.

I thought it was a captivating movie.

Don’t expect a conclusive explanation at the end of the movie. To be honest, there were as many open questions at the end of the movie as there were at the beginning. The final message was not really clear to me. Is it about the colorless and monotonous, routine life that some of us lead? Is it an indictment of our modernist and materialistic society? Or a satirical view of that society? Or are aliens using humanity to breed their species in an infinite cycle? Like the cuckoo at the beginning. Maybe I expected a little more. But in the end I thought “Vivarium” was an intriguing movie with an exceptional set-up, kind of unusual images and yet some admirable acting. In particular Imogen Poots left a lasting impression. However, I fear that not everyone will share the same opinion.