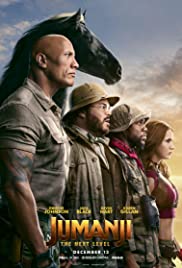 In Jumanji: The Next Level, the gang is back but the game has changed. As they return to rescue one of their own, the players will have to brave parts unknown from arid deserts to snowy mountains, to escape the world's most dangerous game.

If you touch my boobs, I will murder you!
Too late! That was the first thing I did.

In recent years, the terms “Remake” and “Reboot” have become very popular in Hollywood. Much to my annoyance. In most cases, these knockoffs are just a shadow of the original. Not to say abominably bad and horrible to look at. The biggest example of this (for me personally anyway) is the movie “Ghostbusters” from 2016. If Bill Murray was no longer among the living, he would have turned around in his grave. A needless copy without humor and full of recycled ideas. A few years ago when I was told that a remake was being made of the famous film “Jumanji” (with the unparalleled Robin Williams in a leading role) from 1995, I was shocked. And certainly when it turned out that Dwayne Johnson hijacked the leading role. Yet another redundant and ridiculous attempt to imitate a past milestone.

To my surprise, however, “Jumanji: Welcome to the Jungle” turned out to be an exceptionally successful experiment. And that’s because of the unique idea to replace the “Jumanji board game” with an old skool console game where four innocent students are teleported into and where they need to complete a quest while playing a character in this game. It’s the only way to escape the game. Not only was it a funny movie (due to the interactions and personality contradictions between the real youngsters and their avatar in the video game). The concept was also original. Adding video game features such as NPCs, cut scenes, and the fact that each character has a limited number of lives, was a masterful move. It’s not without reason that the film was a real success in the theaters. And the inevitable happened. The sequel “Jumanji: The next level” is a fact.

Unfortunately, as I feared, this new sequel doesn’t take the saga to a new level. To be honest, I thought it was simply an uninspired story that simply tries to take advantage of the previous film’s success. An easy solution to squeeze the last dollars out of a milked-out project. The novelties can be counted on a broken abacus. Not many, in this case. The characters are all still the same. This time supplemented with two old grumpy retirees (Danny DeVito and Danny Glover) who used to be business partners when they owned a thriving restaurant. As with every new level in a video game, the environment in which the adventure takes place is different from the previous level. So you’ll be presented with a sandy location with associated oases. And also, our friends will encounter a completely different fauna on their path.

Let’s bury this devilish game once and for all.

The most successful aspect of this sequel is the fact that the different characters were initially mixed. That makes for hilarious moments when you see Dwayne Johnson imitating the characteristics of a Dany DeVito. But besides that, there’s nothing innovative to discover in this sequel. It’s a well-known story with a new look. It’s the same as when a new “FIFA Soccer” version is being released on the game market. Graphically it may look a bit sharper and some new players and options have been added. But otherwise, the look and feel are similar and you have trouble discovering the points of improvement. Well, “Jumanji: The Next Level” was entertaining and packed with sometimes masterful CGI. A good alternative to fill a pleasant movie night. But the source from which creative ideas are created is exhausted. Let’s hope they bury the game “Jumanji” in a well-hidden spot once and for all, so nobody can lay their hands on it again. I think we’ve had enough of this.