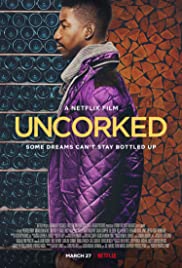 Elijah must balance his dream of becoming a master sommelier with his father's expectations that he carry on the family's Memphis BBQ joint.

Okay, so I want to become a master sommelier.
Is that like a pirate?
No, that’s a Somalian.

I don’t have a thing for wine. Never had. Even an excellent wine, recommended by connoisseurs, won’t appeal to me. I never liked the taste of it. Why the hell would I watch a movie that focuses on the world of wines? Well, it’s just a coincidence. I discovered “Uncorked” while browsing Netflix and thought I’d give it a shot. And also because I didn’t make the link between the movie title and the whole wine happening. To be honest, I wasn’t overly enthusiastic about the part about getting a sommelier diploma. The barbecue restaurant storyline, on the other hand, was mouth-watering. And as the film progressed, my hunger pangs intensified. And that didn’t happen since “Chef”.

Well, the film doesn’t only consist of scenes in which wine bottles are uncorked and someone trying to identify this divine beverage while gurgling and spitting it out. This Netflix drama is also about the inner conflict Elijah (Mamoudou “Underwater” Athie) struggles with. This determined young man from Memphis, whose daily routine consists of helping out in the family business and working in the local wine store, has to make an all-important decision in his life. Either disappoint his father. Either himself. His father Louis (Courtney B. “Ben is back” Vance) is convinced his son will take over the family business in the future. Just like Louis did from his father. And Elijah is increasingly realizing that the profession of a master sommelier is more dear to him than marinating and barbequing spare ribs.

There’s the generation gap once again.

So “Uncorked” brings the well-known theme about a generation gap. On the one hand, Elijah doesn’t want to abandon his father. On the other hand, he’s still looking for his aim in life. His heart and soul belongs to the sparkling world of wines. A way to mentally travel to other countries (“When I get a wine from someplace like France, someplace like Spain, I just feel like I’m kinda there.”), as a compensation for the lack of this in his youth. The problem is that his father doesn’t believe anymore in the person Elijah and sees it as yet another insane idea that his son has. And he shows that by acting indifferent and disinterested. Needless to say, there is, of course, Sylvia (Niecy Nash), the concerned and supportive mother figure who properly convinces her husband to let Elijah work it out of his system. She’s the missing link between the two poorly communicating vessels, while she herself has to deal with her own health problem.

“Uncorked” is an average movie. A movie that you’d watch while sitting relaxed on your sofa, with or without a glass of wine within reach. A film with a smile and a tear. The humor is not often present but sometimes subtle. For example, the Somalis debacle elicited a brief chuckle. And all this with a soundtrack filled with contemporary hip-hop music that belongs more to the spare ribs house than to the cultured world of wine connoisseurs. It’s a movie you love or dislike, just like with wine. Family values and chasing your dreams are the key topics that I’ll remember from this movie. But I can’t say that the urge for drinking wine got any bigger after watching this Netflix movie.

Uncorked is now available on Netflix