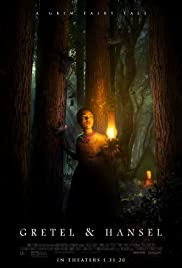 A long time ago in a distant fairy tale countryside, a young girl leads her little brother into a dark wood in desperate search of food and work, only to stumble upon a nexus of terrifying evil.

Tell me the fairy tale again.
It’s too scary, you’ll start seeing things that aren’t there.

In recent years we have been flooded with live-action versions of well-known Disney fairy tales. These usually follow the fairytale story without deviation. Even the appearance and atmosphere are mostly identical to the original. However, this isn’t the case with “Gretel & Hansel”. Director Osgood Perkins has gone to great lengths to make it an idiosyncratic creation. It largely corresponds to the original story of the Brothers Grimm. But the moral of the story is very different from the original fairy tale. So, no nasty stepmother. No pebbles or bread crumbs. In the original fairy tale, Hans was more inventive. Here he’s a helpless little fellow dependent on his bigger sister. But it’s mainly the role Gretel plays in this story and how this character evolves. Hence probably also the switching of the names in the film title, which indicates Gretel’s part is more important.

The period in which it takes place is comparable to that in “The VVitch” or “Apostle”. Most likely at the time of the great famine in the 14th century, when it was difficult for many to survive. Most lived in shabby houses and had no means to meet their daily needs. Similarly, the mother of Gretel and Hans, who chases the children out of the house with unmistakable words (and a dangerous-looking lumberjack ax). First, they are advised by a friendly man to look for work and join a group of lumberjacks and especially not to deviate from the path. Hunger and the discovery of delicious looking mushroom causes the two children to leave the path and discover a black house in the forest.

A dark, eery, and disturbing mood.

The mushroom scene can be called amusing and already suggests that this film is certainly not an accessible version of the known fairy tale. It’s also not recommended to watch this with your kids as you did with “The Lion King”. This film is too dark, gloomy, and perhaps too terrifying for small children. Even though I found the label “horror” a bit exaggerated. “Gretel & Hansel” isn’t really creepy. Don’t expect the typical elements of a horror. No jump scares. No gory scenes or possessed creepy persons. But certainly, you’ll experience an unpleasant and disturbing feeling throughout the whole movie. An intense, eery atmosphere in which you are immersed.

Artistic and experimental sort of film.

I also fear that due to its artistic character and experimental production, this morbid fairy tale isn’t for everyone. Many horror fans will be terribly disappointed and rather portray it as a pretentious movie. Evildoers are of course the lack of tension and the slow pace. But for me, it was the unique atmosphere and the imaginative story that made it an exciting experience. The design of the witch house (without gingerbread walls decorated with all kinds of sweetness) will confuse you. A pitch-black, modernist house built with contemporary materials and styles. Not exactly something you will start nibbling on. On the one hand, the interior is characteristic of that specific time. But on the other hand, there are also style features that belong to the present era. And the richly filled table full of delicious stews and pastries is a feast for the eyes.

What appealed to me the most was the excellent cast. Alice Krige as the terrifying and devilish witch in particular was simply fabulous. And Sophia Lillis also plays the role of Gretel convincingly. A young girl with unexpected future prospects. The beautiful music and sound effects together with the used color palette, provided a special atmosphere. Only the denouement I found a bit unfortunate and not appropriate for the slow tempo of the film. I can certainly enjoy a straightforward version of a fairy tale. But this contrary version managed to surprise me. Definitely a film for those who love aesthetically beautiful films.