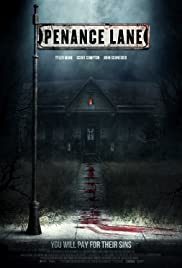 A hardened criminal fresh out of the joint takes a job as a handyman in a dilapidated house; but the twisted horrors he finds inside are enough to send anyone running. So why does he stay? And why are so many people drawn to Penance Lane?

I’m gonna get us out of this.
We’re gonna be okay.

“Penance Lane” is something for the fans of cheaply produced B-horror movies that don’t exactly excel when it comes to the storyline. I was actually very curious about this movie after reading the synopsis on IMDb. And the movie poster also looked interesting. So let me say that I started watching the film with a dose of healthy enthusiasm. Unfortunately, that enthusiasm collapsed halfway through the film like a soufflé that has just come out of the oven. It’s a pity though, because the first half was of a decent level.

The prologue in itself made me curious enough and confirmed what I expected. A dilapidated house where some gang members hid after committing a robbery. Such a gang of “badasses” with impressive guns and an attitude as if they can handle the whole world. Unfortunately, they are no match for what is harassing them from dark corners and dark places in this creepy house. Why this was actually the most compelling part of the movie, I don’t really have an explanation for. Maybe because you don’t really know which direction it will go. Is it something demonic or will it be a “Texas Chain Saw Massacre” kind of film?

Let’s bring in the handyman.

Time to introduce the protagonist. Crimson Matthews (Tyler Mane) strolls around the town streets. An ex-convict with a rugged appearance. He gets into a fight with the son of the local Police Captain, when it turns out that this son uses his girlfriend (Scout Taylor-Compton) as a punching bag, and then meets the owner (mother of the girl in question) of the local diner. Crimson doesn’t waste any time and almost immediately seeks a job as a handyman. And he ends up at the abandoned house, apparently owned by the local priest (John Schneider) who hires him without further ado. From the start, it’s clear that our tough hero doesn’t intend to demonstrate ingenious handyman-techniques. It’s also evident that it’s no coincidence he ended up in this house. And that his night’s rest would be disturbed by something that wanders through the house like a shadow, was also to be expected. Despite the fact that there’s sometimes a bit of too exaggerated acting and toe-curling, clumsy dialogues are being used, the film remained fascinating. Till this point anyway. Because somewhere in the middle of the film, the plot twist presents itself and the tone of the film changes drastically.

Do I sense a Rob Zombie influence?

If you look at “Penance Lane” in its entirety in terms of storyline and overall look and feel, you could say that it belongs to Rob Zombie’s oeuvre (albeit among the less successful creations). Coincidentally, there are a number of actors who also appeared in a Rob Zombie movies before. Like Tyler Mane who played Michael Myers in “Halloween II“. Scout Taylor-Compton also played an important role in that film. And then there’s Daniel Roebuck (the Police Captain) who got a role in almost every Rob Zombie movie. It may not have affected the creators of this film, but the least you can say is that it’s extremely coincidental. I’m not a real Rob Zombie adept but I could appreciate his flick “31”.

Ultimately, it was a disappointment.

In the end, “Penance Lane” was a disappointment for me. If the gradation of my enthusiasm were graphed, I’m sure it would resemble any COVID-19 graph. Except that there’s no sign of a “flatten the curve” effect. After its peak, the curve goes very fast to a zero point. Maybe my expectations weren’t met because the concept changed drastically. In the end, it became a kind of thriller without supernatural apparitions. Rather a crime story in which an insane individual has set up a lucrative business activity. The story made no sense and at some point became downright ridiculous. I have learned the following lesson from this. No matter how good a summary sounds or what a movie poster looks like, it’s never a guarantee the movie will be any good. And yet there was, somewhere deeply hidden, an excellent film. Unfortunately, they failed to conjure it.