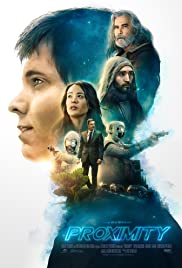 A young NASA JPL scientist is abducted by extraterrestrials but when no one believes his story he becomes obsessed with finding proof which leads him on a journey of discovery.

“Proximity” had potential. The film partially redeemed this but then blatantly fails on a completely different level. With a film about alien abduction, there’s one particular expectation wherewith the film stands or falls. And that’s the look of the spacecraft with which those green men fly around. In many SF movies with the same subject, this is either shown only briefly. Or the design and special effects are so pitifully bad that you wished those alien tourists instantly have an engine problem and crash down with their ugly flying saucer. But when Isaac (Ryan Mason) early in the movie sees the spinning vehicle fly above him, I noticed his approving look. Not because he liked the design, but because his conviction was confirmed in this way. Me on the other hand, probably had an approving look because the spaceship looked really good. Unfortunately, this fact alone could not save the film.

Believe me. Cinematographically, this film looks slick. The used special effects clearly show that director Eric Demeusy is no novice. The experience he gained with “Tron: Legacy” as a 3D animator and other projects clearly paid off. So no blurry images with bad special effects. And no situations where you get the feeling that the spacecraft were hung on a silk threads to move them that way. Even the aliens looked fine and credible. So in terms of imaging, it’s okay. And this even during the entire film.

Scotty, beam me up.

I also found the story promising in the beginning. Nerdy looking Isaac (Ryan Masson) who’s convinced aliens exist and looks at computer screens every day to watch bleeps from satellites, almost faints when one day, during a bike ride, a silver flying saucer flies over him. Lucky he has a camera (Betamax model) with him to film the event. He can even capture a “close encounter” with a real Martian. Next, he’s beamed up (just like a genuine Enterprise crew member) and awakens somewhere in a field. Unharmed but with a gigantic 3-day hole in his memory. What follows is a chaotic period for Isaac. A period in which he tries to make clear to the world that he was kidnapped by aliens. And then we get a perfect demonstration of how things are in our society today. One day you’ll be hailed and adored. The next day you are booed, razed to the ground, and buried under reproaches and incriminating allegations.

Uh, what happened to the story?

Till here, the story was still amusing and interesting. The hassle of uploading the video and the subsequent reactions and comments. The invitation by a television program and the disappointment by Isaac. The fuss that arises on the internet and then Isaac’s search for fellow victims and like-minded people. It felt “Goonies” -like and reminiscent of the bygone days when Spielberg scored high with his SF films about “close encounters”. There was even an “E.T.” joke used by the two nerds in the lab. And then halfway through, the film gets a completely absurd twist. “Men in Black” clones suddenly show up. And the film suddenly takes on Star Wars allures. Together with the beautiful Sara (Highdee Kuan), a fellow girl who has experienced something similar, Isaac flees from a mysterious government agency. Zed (Christian Prentice), the phenomenon in Costa Rica, was the most hilarious part of the movie. This whizzkid owns a treehouse in the middle of the jungle (Yeah really!) where he hacks NASA servers. How he can have a connection with the internet there, is a mystery to me. I sometimes have poor reception in my kitchen here. And I’m certain I’m living in that part of the world that’s civilized enough to make sure it’s top-notch. In any case, the story becomes increasingly nonsensical by the minute. Not to mention the denouement where the aliens reveal what they are looking for on earth. Completely laughable.

All in all, it’s admirable what they’ve achieved in this low-budget SF. In terms of footage and imagery, the film is simply overwhelming. The special effects look fantastic. There’s also little to complain about the acting itself. Masson’s acting is almost perfect. Highdee Kuan is a perfect addition. And the character Zed is highly entertaining. But unfortunately, it’s especially the storyline that’s below par. I suggest Demeusy hires a professional scriptwriter the next time to support his professional-looking visuals.