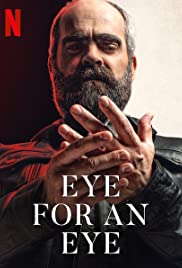 One harsh word or lack of respect for my father,
and I come here and raise hell.

Revenge movies. Nothing is more fun than watching a blood-curdling film in which a victim, who has been beaten to a pulp or almost tortured to death, resurrects and ruthlessly and cruelly takes revenge on his or her assailants. Revenge films come in different variations and gradations. The only similarity they have is that those who are the cause of all the misery generally get the short end of the stick (except in “Eden Lake”). Revenge films have been in circulation for a long time and yet form a tasteful subgenre. Who remembers “The Toxic Avenger”? A hilarious and bloody film in which a nerd, constantly being bullied by local kids, mutates into a nasty chemical creature that takes revenge in a violent way. Or the controversial film “I Spit on Your Grave“? “Revenge“, “Hard Candy” and “John Wick“? The line is big and always has one outcome: mutilated perpetrator(s) and a victim who leaves the past behind with his/her head held high and determinedly faces a new, carefree future.

In “Quien a Hierro Mata” (aka “Eye For an Eye”), the protagonist Mario (Louis Tosar) cannot completely let go of the past. Images from that period haunt his mind and everything indicates that this nurse at a senior care facility can never settle for the injustice done to his family. The seemingly calm and easy-going caretaker nevertheless has a bright future ahead of him. His wife Julia (María Vázquez) is pregnant with their first child. Nothing seems to get in the way of happiness. Until one day Antonio Padin (Xan Cejudo), the notorious head of a drug cartel, has decided to exchange prison life for a stay in the retirement home where Mario is employed. Antonio Padin suffers from a terminal illness that slowly paralyzes him. And apparently, the relationship between him and his two sons Toño (Ismael Martinez) and Kike (Enric Auquer) is so sour that he opts for the retirement home rather than waiting for his end at home. By coincidence, there’s a link between Mario and this deteriorating old man that causes Mario to slowly transform from a good-natured person into an avenging angel with a dark plan.

Be warned. It’s a slow-burner.

Let me immediately warn the action movie fetishists. This is not a Hollywood film in which the action scenes follow each other at a shockingly fast pace. The film is a real slow-burner, with some violent scenes here and there in the first half. Just to demonstrate that the Padin family aren’t only hard-working entrepreneurs, operating a thriving crab-industry with associated culinary establishments. You’ll see that the traps on their fishing boats can also be used for other purposes. And when the two brothers visit their father in the retirement home, just to report to him about their future plans with Chinese customers, they make sure everybody knows that they are untouchable and feared individuals. Kike in particular is an annoying guy with a short fuse who, even without hesitation, questions his father’s mental health and treats him disrespectfully.

“Quien a Hierro Mata” is a dark and gripping thriller that excels thanks to its raw realism and the way in which various actors portray it. All credit to Louis Tosar for showing in a solid way how a tragic past (shown through a whole lot of flashbacks) determines how he judges over certain actions. The imposing beard hides every emotion. His character immediately reminded me of Joaquin Phoenix in “You were never really here”. The ius talionis principle that he applies here (hence the film title) is what makes this film more unique compared to other revenge films. This vigilante ensures that the perpetrator undergoes the same treatment under the same circumstances. Let’s put the make-up department in the spotlight as well. Because, the way Antonio is slowly changing looks terrifying. I was just wondering if Antonio Padin noticed what was happening to him.

Worthwhile to give it a try.

I admit it. I’ve been pleasantly surprised by Spanish-language films several times already. After “Aterrados” and “El Hoyo” I also thought this was a successful film. Certainly not a disappointment, after I started watching it on Netflix without any prior knowledge. First of all, you think this is an average revenge movie with the same known storyline. But this soon changes due to the sudden twist and the shocking denouement. It’s wonderful to see how they’ve managed to change the tone of this film from ordinary to moderately chaotic aggressive. The film shows how deep-seated hatred can change a person. It’s not an exceptional film, but it’s relentless and definitely worth watching. I was just wondering one thing. How is it that this retirement home didn’t simply refuse the admission of a known and feared drug lord?

“Quien a Hierro Mata” is now available on Netflix