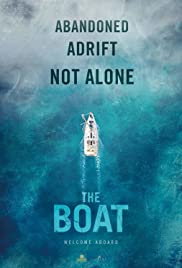 A solo sailor is locked inside the head of a sailboat which is under steam on autopilot.

Obviously, there are more movies about machines suddenly having a will of their own and starting to make life miserable for their fellow humans. For example, in days long gone, there was Herbie, the love bug, who regularly took over the steering wheel without asking. Admittedly, this movie won’t scare you since it was a hilarious family movie. Of a different caliber is the movie “The Car” with a demonic, black Lincoln Continental Mark III car that repeatedly left a rubber trail on the face of an innocent passer-by. Even better and more famous, the glitzy Plymouth Fury ’58 in “Christine”. A car that could restore its wrinkled bodywork to its original condition without hesitating. And it killed those who bothered its owner. You could say that the “Titanic” made quite a few victims as well. But that wasn’t because this mastodon of a boat suddenly started sailing its own course, but rather because an iceberg popped up suddenly. The boat in this movie, on the other hand, is a different story. Sounds exciting, doesn’t it?

There’s not much to work with.

It does sound exciting. The film itself wasn’t. But admit. How exciting can a movie be in which a boat sails its own course? And what if there’s a passenger on board who accidentally ended up there? The only thing such a wayward boat can do is try to get that guy off the boat by swinging certain parts in his direction. You can also lock him up in a small room so that he can’t move. But these are eventually all the available possibilities that can be used. Unfortunately, you still have to fill up the rest of the film.

And that’s what you get the rest of the movie. Uninteresting filler footage. You see how a young fisherman (Joe Azzopardi) leaves his house in the morning and sails his boat across the Maltese azure blue ocean. I suppose to go fishing. I immediately wondered why he had to go so far at sea for this. That aside, because I’m actually a complete layman when it comes to fishing at sea. In any case, he ends up in a fog bank and (literally) bumps into the abandoned sailboat. When he climbs on board to see if anyone is present, he suddenly finds out that his own boat has disappeared. And so he finds himself in a hopeless situation. Completely alone. Without water, without food, and non-working communication tools.

Nope, it wasn’t exciting for me.

Unfortunately, it didn’t work for me. I had a similar feeling about “All is lost”. There’s nothing wrong with the used images. The endless ocean and dark cloud formations are rewarding objects for making timeless images. Even the footage inside the cursed ship (with its limited surface area) looks professional. But a single man on a boat bobbing around, cannot provide lengthy, entertaining conversations. Apart from a bit of grumbling, swearing, and murmuring, there is nothing to be heard in that area here. And at one point it seemed as if the film was repeating itself. The only highlights you could mention are the toilet scene and the storm suddenly coming up. And of course, the acting of the sole protagonist wasn’t bad at all (even if it was limited to staring desperately). But otherwise, in my personal opinion, I thought it was pretty boring. Even the denouement was pretty dull. As if they were also a bit on a wrong track in terms of creativity. That last image of the floating boating on the horizon had the wrong effect on me. It just made me chuckle quietly.