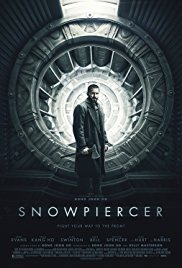 In a future where a failed global-warming experiment kills off most life on the planet, a class system evolves aboard the Snowpiercer, a train that travels around the globe via a perpetual-motion engine.

They’ve got no bullets!

This film was a pleasant surprise for once. Not because of the action, but because of the deeper meaning incorporated into it. The train is actually a metaphor for the contemporary world we’re living in. A life that goes forward in a swift tempo for many of us. The train is actually a reflection of a micro-economy with a properly measured division in different classes. The poor people (dangling at the bottom of society) are located in the final wagon in appalling conditions. The wealthier ones take their place in front surrounded by opulence and luxury. In between is the middle class who can’t afford the excesses as the upper class, but are still considerably better off than the lower class.

The entire film is set on the high-tech express train “Snowpiercer” designed by a certain Mr. Wilford. The train is ingeniously constructed. It contains an ecosystem to produce water out of the broken ice the train drills through and is actually a perpetual motion machine that travels forever on a global train track of tens of thousands of kilometers. This is because the brilliant scientists came up with the bright idea of spraying a certain substance into the atmosphere in order to bring global warming back to normal. Unfortunately, this fails, turning the earth into a giant popsicle and making life here impossible. Several thousand people were lucky enough to be able to get on board of this eternal moving train and wait patiently until living on earth would be possible again. Stopping the train is out of the question. And whoever dares to go outside (The first question I asked myself was “How?“) ​​Instantly turns into a stalactite (or stalagmite! Depends on how you end up outside).

There’s a strict and repressive dictatorial regime to ensure that this society stays in balance. There’s an underhand co-operation between the front and rear part of the train. As a result, milestones are staged in such a way that the population growth is kept under control and the less fortunate retain a glimmer of hope to unyoke themselves one day. The only contact that these poor souls have with the other part is when there are food distributions. Food consisting of block-shaped jelly-like substances. Riots are immediately nipped in the bud. Usually followed by a flaming speech of Mason (beautifully portrayed by Tilda Swinton) who displays a morbid adoration and idolatry for Wilford. She’s a sort of “Effie Trinket” from “The Hunger Games“, only uglier. The ultimate message is that they should be eternally grateful and they are privileged to be on board. “Know your position, keep your position, be the shoe.” That’s the final message. The shoe is used as a metaphor to indicate that they belong at the bottom of the hierarchy and have to stay there.

This post-apocalyptic SF fascinated me and was extremely entertaining up to the moment they reached the water treatment plant. Till then it was a very gloomy picture. A picture we’ve witnessed several times in our history. From slavery in the southern states of America to Mao Tse-tung. A story of oppression and slavery. The images of people dressed in rags, queuing for their proteins and living without daylight in the last wagons. The build-up to the revolution and the ultimate breakthrough, are successfully displayed. The revolution is led by Curtis (Chris Evans), a leader in the making who has a rather dubious past on this train and who leads his troops forward on the way to the engine. For who owns the locomotive, is God! Along the way, they liberate Namgoong Minsu (Kang-ho Song) and his daughter Yona. This “Kronol” addicted prisoner, appears to be a security specialist and should be able to open all electronically sealed doors. The moment a door to the next wagon is being opened and they face an army of SM-masters equipped with axes, is impressive. Even more impressive than the battle that follows. I’m almost certain Tarantino starts to drool spontaneously while watching this scene.

What follows is a hallucinatory, surreal screening. Compared with this, the guided tour of Willy Wonka in his own factory meant absolutely nothing. Successively we see a greenhouse where fresh tomatoes are grown, an aquarium where manta rays swim around, a restaurant that serves sushi twice a year and a colorful class where a kind of Maria von Trapp teaches history lessons about the kingdom of Wilford. It feels like a Lynch movie sometimes where the scriptwriter himself sniffed too much “Kronol”. There were also times when I had an “Uh what!” moment. Like when they were shooting with a futuristic-looking gun at each other while the train made ​​a seemingly endless huge curve. And the reason why the partying and “Kronol” sniffing mass, dressed in fur coats, became a bunch of bloodthirsty zombies was also a mystery to me. I also found it strange that the passengers couldn’t remember anything from their childhood or life on earth. And it ended with a shrewd reference to child labor. The most positive supporting actor was John Hurt as the counselor of Curtis. The most negative contribution was Ed Harris in a Chinese robe. Totally implausible.