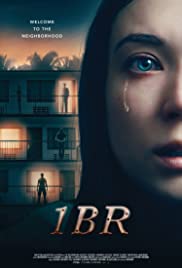 Sarah tries to start anew in LA, but her neighbours are not what they seem.

We’re so glad to have
you in the building.

It was two months. Two months that I didn’t feel the urge to write down a nuanced and honest opinion about a movie I’ve seen. Maybe it was a lack of motivation because of the limited feedback on my previous writings. Maybe it was because of the enthusiasm with which I threw myself into a “Horror Challenge”. A “Challenge” in which I finally watched 89 films in a period of about 7 weeks. And after these 7 weeks, I realized that I really enjoyed watching 50s and 60s horror. Coincidentally, the movie “1BR” passed during this event and there were words of praise for this horror. Enthusiastically I accepted the invitation from Alok Mishra (one of the producers) to send me a link to a screener. And of course, I’ll be doing something in return by writing this review. So first of all, thank you Alok for forwarding the link.

Believe me, I’m being honest.

Now some will claim that I’ll write a positive review out of gratitude for having obtained a free link. Or because it’s that time of the year where people ought to be mega-kind. However, nothing is less true. If “1BR” was a complete crap movie, I would describe it like that without any problem. Before Alok suffers from a panic attack, I will immediately reassure him. “1BR” is a decent film with a surprising twist. Despite the lack of too gory moments or demonic, paranormal revelations, it turned out to be a frightening film. One where you feel uncomfortable about the whole situation. However, I cannot tell much about the story itself. That would only spoil the fun. It’s best that you watch this film without knowing anything, so it’ll hit you without warning. What Sarah (Nicole Brydon Bloom) doesn’t realize when she moves into an apartment of “Asilo del Mar” is that her situation will look very different real quick. Sarah is a timid young adult who wants to start a new life in L.A. far from her family. She wants to make it as a fashion designer and is determined to leave her past far behind. A lopsided relationship with her father caused her to travel to the city of angels. Something that becomes clearer later in the film.

No need to wait. It escalates quickly.

As a spectator, you don’t need to wait really long before it starts to escalate. After 30 minutes, the mood changes from pleasant to downright unpleasant. There is no indication that Sarah walked into the lion’s den. The other residents of the complex are helpful, hospitable, and over-friendly. To be honest, I thought that actually felt scary. I can’t imagine such a community in our current narcissistic and self-centered world where everyone suffers from extreme navel-gazing. The atmosphere in this building is of a high “Melrose Place” level. There’s even a central swimming pool, around which all residents can enjoy social gatherings and cozy barbecues. Those residents are introduced to you in slow motion at the start of the film and are a mixed bag of people. Including the retired actress Edie (Susan Davis) whose health is clearly deteriorating. The helpful, attractive neighbor Brian (Giles Matthey) for whom Sarah immediately has an attraction. And even the landlord Jerry (Taylor Nichols) does his utmost best to make Sarah feel at home in her new home.

There are only a few disturbing factors, according to Sarah. First of all, the creepy Lester (Clayton Hoff). A resident who keeps an eye on her like a one-eyed pirate. Then there are the disturbing noises at night. She was told this is due to poorly maintained pipelines. And then the main fact that no pets are actually allowed in this building, which means that Sarah is forced to keep her cat Giles carefully hidden. Something that does not go unnoticed and is the beginning of a kind of psychological terror. The unknown actress Nicole Brydon Bloom delivers an excellent acting performance and is the most defining person in this film. She shows a range of emotions throughout the whole film. First enthusiasm. Then bewilderment. And after that, desperation and resignation. And in the end, the bold survival instinct emerges suddenly. Not only Bloom’s acting is sublime at times. Also, the way the side characters play their split personality is simply magnificent.

Once again, the fact a screener was sent to me, isn’t the reason for my positive comments. Believe me, This movie managed to surprise me. It looks slick. And to be honest, I didn’t know which way it would go until the last minute. The uncomfortable feeling I had is partly due to the realistic image that is being created. The feeling you have when you end up in a situation and you don’t know how to rescue yourself from that terrible predicament. The only (minuscule) minus I could cite is that the denouement immediately reminded me of “The Invitation”. But that’s such a negligible element that I can only say you should definitely check out this intriguing movie.