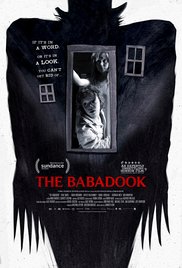 A single mother, plagued by the violent death of her husband, battles with her son's fear of a monster lurking in the house, but soon discovers a sinister presence all around her.

If it’s in a word, or it’s in a look
You can’t get rid of the Babadook.

For horror to be successful, there are several opportunities for hands. Either you use gore elements in such a way that blood, guts and all sorts of other slimy ingredients start dripping, slipping and flowing from the screen. Either an old known creepy veteran (vampire, werewolf or serial killer) shows up and during nocturnal activities scares the shit out of people. Or you use a busload of “from the underworld” derived demons, who take control of a weak person or some ramshackle building and should be exorcised by applying religious rituals that lead to objects flying around and an in foreign language speaking monstrous-looking possessed person. “The Babadook” has none of this. This subtle horror story uses dark corners and grim, sinister sounds. It’s a story that can be interpreted in different ways and in which the phenomenon of “The Babadook” appears by reading a children’s book which popped up suddenly in Samuel’s bookcase. It’s the same as in “Candyman” where the legendary figure Candyman appeared when chanting his name five times in front of a mirror or as in “Evil Dead” when the demons were released after playing a tape with ancient ritual texts.

Six years after the fatal accident that killed her husband Oskar (Benjamin Winspear), Amelia (Essie Davis) is still processing this heavy loss and tries to make ends meet as a single mother, together with her son Samuel (Noah Wiseman). The accident happened on the way to the hospital when Amelia was about to give birth. A traumatic experience that disrupted her relationship with Samuel. You can be sure that Amelia is torn by guilt and her feelings for Samuel, balance between affection and blame. Samuel also did not emerge unscathed from this life event and is anything but an easy boy. At a certain moment I assumed that the unruly and hyperkinetic child Samuel was the thread in this horror. What a nightmare it is to raise such a hysterical child! The hysteria is also fueled by the irrational fear Samuel has for monsters, what leads to a daily ritual of checking closets and other spaces, the inability to control him, Samuel who can’t function in a normal way in a group with all the consequences and the sleepless nights. And when “The Babadook” even starts to wander in the dark corners of the house of this dysfunctional family, total insanity is not far away and Amelia is on the verge of a complete nervous breakdown.

Monsters under the bed.

The Australian writer and director Jennifer Kent manages to mix the well-known “fear of monsters under the bed”-item with traumatic life events and an emotional state of mind into a dizzying downward spiral that leads to total insanity. It’s not horror elements and terrifying frights that enable this, but the excellent performances of Essie Davis and Noah Wiseman. Essie Davis plays an extremely complicated character who, as the film progresses, degenerates psychologically and needs to drag herself fatigued, depressed and hopeless through life. Kent clearly focused on the portrayal of this mother-figure and very minutely Amelia’s psyche is exposed. Noah Wiseman manages to portray Samuel as a very annoying, uncontrollable and confused boy with an obsession for weapons, which he needs to defeat the evil monsters with. This obsession gets him expelled from school and injures the snooty daughter of Amelia’s sister. With his bulging eyes and pale skin, he looks sick and obviously you have both pity on him and on the other hand he’s so unbearable that you would prefer to smack his head against a brick wall. Just as his mum wished to do at a particular moment. Would he be such a brat in reality, than this performance is nothing special. Otherwise, it’s a masterful acting performance. “The Babadook” is ultimately a kind of “Edward Scissorhands” dressed like a magician. A caricature as pictured in the inky pop-up book.

“The Babadook” is not your average horror and was subtly elaborated. It can easily be called the most original and bizarre horror of the year. The seasoned horror fans will not find it truly terrifying and some patience will be asked from the impatient horror fans to endure the slow build-up. But put that aside and you can enjoy an excellent psychological horror that’ll still haunt your thoughts for some time. It’s your choice to decide whether this film is an observation out of the perspective of Amelia or whether it’s a manifestation that arose from her psychological mess. I thought there were some hints that suggest that we are witnessing the nightmare Amelia lives in.  Or “The Babadook” is just another bogeyman that can be placed in the gallery together with his colleagues.