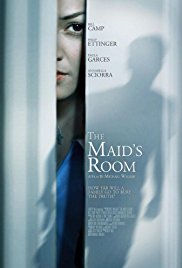 A psychological thriller that explores the complex relationships between truth and justice, hubris and power, wealth and fear.

I wasn’t very excited about this simple story. It rather seems like an adaptation of some light-hearted crime novelette you can buy in any newsstand. A sort of “Der Alte“-story, set in modern times and supported by a soundtrack that reminded me at times of “Twin Peaks“. But the story on its own is meager and certain interpretations aren’t impressive. It’s first and foremost highly predictable and again it’s an indictment against the gap between the wealthy and the less fortunate ones. The apparent invulnerability of certain individuals is the common thread running through the whole story. Besides the short playing time, there isn’t much positive to be said about it.

Drina (Paula Garcés), a beautiful girl from Colombia, has emigrated to the US to work for the Crawford family, a very wealthy family (all the clichés are used again to portray this). The master of the house Mr. Crawford (Bill Camp) is a typical businessman making lots of money probably. First of you’re wondering what the hell he does for a living, since the way he expresses himself isn’t that impressive. He looks rather uncertain when explaining things, without determination and timid when it comes to making decisions. Mrs.Crawford (Annabella Sciorra) is the exuberant wife who’s undoubtedly the one who spends the most money and as a tradition, it looks as if she has a drinking problem. Philip Ettinger plays the spoiled son Brandon who’s strolling through the house and lives there as a king. He is a typical teenager who has things going for him just because of his origin (if it wasn’t for his father he’d never be able to get into Princeton). Finally, Drina is modesty itself. The only living space where she can stay in her spare time is her tiny little bedroom along the garage. The rest of the house is solely a work area for her. And despite the friendly tone used by Mrs. Crawford, you still can feel her haughty attitude.

One night Brandon returns home drunk, pukes in the garage, and stumbles back in his bed. The next morning Drina discovers that the car is damaged seriously and there are also signs of blood being wiped off. At least there was an attempt to do that. Brandon minimizes this incident and brings up an explanation that he hit a deer. Until Drina finds an article in Brandon’s room about a fatal traffic accident with a hit and run. And after that, the whole story derails. You would expect the story to focus on the crime being unraveled. However, it becomes an ethical issue of bribery and justice, with all its consequences. It ends up with a where-do-we-hide-the-body soap as you would expect in “How to get away with murder?“.

And not only the story wasn’t very special. The performances also were sometimes toe-curling bad. Especially the performances of Mr. And Mrs. Crawford were too sad for words. The opening scene in the office of Mr. Crawford with a dialogue between these two characters about whether or not to hire Drina as the main topic, almost made me decide to turn off the television. Mainly Drina and Brandon acted still acceptable. Drina by her youthful innocence and probably mostly by her natural beauty and sensual appearance (despite the attempt to give her a more chaste appearance by giving here a traditional hairstyle). You could hear her South American accent when she spoke, but it had the wrong effect on me. Instead of sounding pitiful, it sounded incredibly sensual. Brandon did his best not to get too dignified. Despite his stable situation as the son of rich folks, he sometimes acted as an insecure teen boy.

Ultimately you can compare “The Maid’s Room” with a pulp novelette, you grab from a kiosk and while sitting somewhere waiting for something, you glance through it just to pass the time. How appropriate. It only serves as a means to kill time (no pun intended).