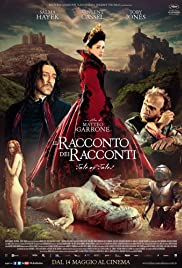 From the bitter quest of the Queen of Longtrellis, to two mysterious sisters who provoke the passion of a king, to the King of Highhills obsessed with a giant Flea, these tales are inspired by the fairytales by Giambattista Basile.

Here is the husband that you chose for me. Please, forgive me.

“Tale of Tales” is based on stories of the 17th-century author Giambattista Basile from Napoli. Three strange tales are ingeniously interwoven and subsequently they end with a not so impressive conclusion. Each of them are atypical fairy tales. One more insane than the other. You can expect some dark stories with a fairly shocking ending. Three kingdoms, each with their own concerns and problems. The moment I saw the queen of Longtrellis consuming the bloody heart of a sea monster, I knew these weren’t exactly stories I would read to my children. Rather, these are fairy tales for adults provided with some rather strange twists.

In well-known fairy tales, events are usually presented more rosy. And almost all of them have a happy ending. In “Tale of Tales” however you’ll witness disturbing events with which the ruling nobles are being confronted. And don’t expect a happy ending or a pig with a long snout. All in all these are fairy tales with a touch of absurd black humor. No, these tales won’t make you happy. However, I must admit I enjoyed it more and more as the film progressed. A series of erotically charged and brutal confrontational scenes drenched with loads of melancholy and sadness. To my surprise this two-hour movie was finished before I realized it.

The same values and tribulations as they occur in children’s fairy tales, are presented here. Making an unfulfilled wish come true, providing that something else will be sacrificed. Dazzling neurotic acts that cause painful confrontations. Morbid adoration that stands in the way of making any kind of realistic decision. You can find insanity in every separate story. And this because of an absurd motive that’ll lead to an absurd development.

First of all there’s the story of the king (John C. Reilly) and queen (Salma Hayek) of Longtrellis who carry out a fairly strange rite because of an unfulfilled desire to have children. Such as digesting the cooked heart of a sea monster. However, it has fatal consequences and the final result (in the form of twin brothers Christian and Jonah Lees) looks rather creepy. Then there’s the king of Strongcliff (Vincent Cassel), who’s plagued by an insatiable lust and has an unlimited appetite for female nudity. This adoration blinded him so that he ended up courting a lady whose voice sounds sweet, but whose appearance isn’t exactly youthful. And finally there’s the king of High hills (Toby Jones) who suddenly exhibits a morbid love for a flea. He starts feeding it secretly and thus puts the future of his only daughter at stake. The latter story had a big wtf feeling and really blew my mind. Absurdity at best.

The whole film has a true Renaissance-like appearance and looks perfect. The costumes, the fortresses and the poor villages. It looks authentic and realistic. Brilliant how a medieval era comes to life on the screen. The participating actors I found extremely fascinating. The personification of certain obsessions (as we sometimes encounter even in our modern times) is brilliantly portrayed. Especially Vincent Cassel and Toby Jones score high on the scale of insanity. The most sinister character was the scary looking necromancer (Franco Pistoni). In my view, this was an extremely successful film. But due to the amount of blood and bosoms, it certainly isn’t suitable for children’s eyes.