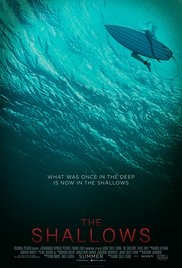 When Nancy is surfing on a secluded beach, she finds herself on the feeding ground of a great white shark. Though she is stranded only 200 yards from shore, survival proves to be the ultimate test of wills, requiring all of Nancy's ingenuity, resourcefulness, and fortitude.

When you succeed in attracting more attention as a puny little seagull than a large oversized shark, you deserve an honorable mention at any reputable film festival. Never before was I charmed by poultry. A confident, wounded animal and certainly pleasant company. Not even one silly word came out of his beak. A fellow victim in the same life-threatening situation. Steven Seagull was an ingenious contribution to the movie “The Shallows“. That way Nancy (Blake Lively) wasn’t compelled to talk to herself a large portion of the movie. Because, believe me, a cozy chat with the bloodthirsty shark that swam circles around her, wasn’t part of her schedule.

And so we arrive at the following participant out of the world of fauna. The six-meter long psychotic shark who wasn’t satisfied with just the rotting carcass of a whale. Apparently, this carnivore doesn’t like to be disturbed while eating. The comparison with the famous shark “Jaws” is inevitable. Anatomically it’s probably all very accurate. Only in “The shallows” this predator is completely computer-generated, while the Jaws model was a mechanical and electronic model. Not that sharky in this film seemed fake or anatomical wrong.

But in “Jaws” you got the impression that it was a lifelike trained shark. When I was a youngster, I won a plastic shark at the fair. He had gaping jaws and looked quite menacing to me. Until you shoved him to the ground and his gaping mouth was double folded. This plastic monster looked much less threatening when doing that. Rather laughable. Wait for the denouement in “The Shallows” and you’ll understand what I mean.

Nancy is a hottie.

Between all this fauna there’s a female human being in a tiny bikini. Nancy is a ravishing appearance who needs a moment of reflection on her life after the death of her mother. Nothing is more fun than to travel to a Mexican bay where her mother used to go once. Blake Lively was unknown to me, but after seeing her trained body and perfect-looking female parts, I’m planning to watch the other movies she participated in. I’ll be honest. Lively lying on her surfboard with a camera strategically focusing on her tightly shaped buttocks, was a breathtaking sight.

Kudos to Collet-Sera to make this film in such a way that my attention was diverted from these bodily temptations, even though she was wearing a bikini the whole movie. All praise for Lively as well, because she plays almost the entire movie cavalier seul. Not a simple task and she does it with gusto. And this thanks to the excellent cooperation of Steven Seagull.

In terms of story, it actually wasn’t that big of a deal. Exotic blonde visits a beautiful beach and surfs in azure blue water. According to a shark, she looks like a snack. And she ends up on a piece of rock situated too far from the beach and a buoy. Her task is to get to safety, while the highly intelligent shark is patrolling nearby. Not very original. What remains are the beautiful images.

Both the slow-motion footage of the waves, as the underwater clips, look sublime. Perfect images that would fit in a “Bounty” commercial. And then there’s the steadily increasing tension. It’s waiting for the shark to show up, the fatal attack and whether Blake Lively will manage to stay alive (again an appropriate name) and escape. All in all a lot of positive things in this film (except the totally whacked ending) with a simple story. Yet Steven Seagull remains the brilliant highlight of “The Shallows“.