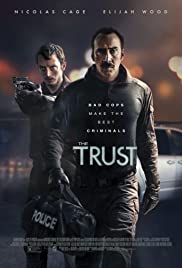 A pair of cops investigating a drug invasion stumble upon a mysterious bank vault.

I think that guy has a friend with deep pockets.

My first reaction to a movie with Nicolas Cage playing in it is that of an eternal doubter. Would I bother to see this? Or should I just ignore it, because I’ve seen a series of Cage failures lately? The only film with Cage that impressed me the last time is “Joe”. This was truly a masterful film where Cage proves that he is a class actor. Most of his films that I’ve seen recently were really substandard. Both as regards the storyline and the acting. Fortunately, “The Trust” was acceptable enough. It’s not a real winner, but it surely isn’t a disappointing monstrosity. It reminded me in some way of “Matchstick Men”.

It’s certainly not a thriller. I’d rather call it a crime story with a touch of morbid, cynical humor. Especially the interaction between the two main characters, Stone (Nicolas Cage) and Waters (Elijah Wood), is highly amusing. Two schmucks serving at a police department where they archive evidence. A job they aren’t really thrilled about anymore. Up to the moment Stone sees something suspicious on a bail slip and sees an opportunity to get out of their situation. The beginning does have a slow start. As the film progresses, however, the tempo increases. This combined with a short runtime makes this film a suitable in-betweener. The acting of the two main characters is sublime. Cage is a slightly neurotic and somewhat disturbed person. A character that suits him perfectly and ensures that his overacting isn’t noticeable. Elijah Wood (another attempt to shake off his “Frodo” past) matches perfectly with the labile Stone. Waters looks like a poor wretch living on the fringes of society. The only thing that wasn’t so obvious, was the maniacal and murderous traits of Stone.

At first sight, this looks a bit like “Ocean’s Eleven”. But this time the heist is done by a kind of “Dumb and Dumber” duo. Although the intelligence of the two semi-corrupt police officers is still high enough to succeed in doing the job. A crime which is needed to break with their daily routine and calmly enjoy their retirement on some tropical island. But the moment it starts to look like an ordinary burglar’s parody, they come up with a few surprising twists. First, there’s an unknown woman (Sky Ferreira) who throws a spanner in the works. And then there are the mood changes of Waters.

“The Trust” certainly doesn’t belong among Cage’s better films, but it surprised nonetheless in a peculiar way. Not that the storyline is extremely original. And the ending is fairly absurd and abrupt. But the performances are interesting and make sure the film rises above mediocrity. And then there’s also the unexpected cameo by Jerry Lewis as Stone’s father. His presence is only momentary. But all the time I was wondering who that familiar-looking aged actor was. His contribution wasn’t very important. But nevertheless. His presence in this amusing film was justified.