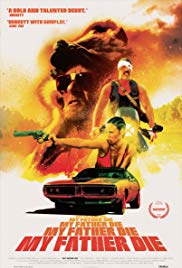 Deaf and mute since having his hearing knocked out at the age of 12, Asher has been training for almost two decades to avenge himself on Ivan, the man that killed his older brother, 21 years ago. And now that his nemesis is out of prison, he gets his chance. But Asher's target also happens to be his father.

I do know that my father was a ferocious fighter, had great potential.
Mama said he could have gone all the way to the top.
Said the safest place for him was in the ring.
She blamed America for sending him into the jungle.
I blame Vietnam for not bringing him home in a box.

Raw, violent and ultra-gory. That’s what “My father die“, the remarkable debut of Sean Brosnan (son of the famous spy), actually has to offer in terms of content. An orgy of senseless violence. A revenge film avant la lettre. A bit like “American Muscle” where revenge was the central topic as well. The only difference is the style and looks of this one compared to the previous. “American Muscle” tries to convey a seventies vibe, while “My father die” looks more stylistic. The use of black and white images in the beginning initially makes you think this is more than a typical revenge movie full of brutal scenes. Until the avenger starts his quest to put the suffering and injustice straight again.

The person who wants to take revenge is Asher (Joe Anderson). A young man who skins alligators in the backyard and who eerily looks like Kurt Cobain wearing a raccoon (I guess) headdress. In appearance anyway, because in terms of hearing this certainly isn’t the case. Asher is, in fact, deaf, because his aggressive father Ivan (Gary Stretch) he has hit him rather harshly on his ears when he was young. And at the same time, this mentally ill brute beats Asher’s older brother Chester (Chester Rushing) to death. And this because he caught him in an intimate embrace with a local girl named Nana (Candace Smith). I suppose Ivan also had an affair with her.

Twenty years later Asher and his mother receive the news about Ivan’s early release due to good behavior. That’s when Asher realizes he has to carry out a major task. Look for Ivan and kill him before this madman shows up at their porch. And that’s the beginning of a long chaotic and violent trip through this poor part of the U.S. The first thing that struck me in this rather pretty vacuous film is the strong and convincing acting of the main characters. Ivan is a terrifying brutal. A bully who without a blink of an eye smashes someone’s brain because the person got in the way. He doesn’t care wether it’s a cop, a gang member or a fragile woman he’s knocking down with a devastating blow. An insensible, numb and ruthless fighter. His posture and appearance are of such an extent that you step aside when he nears you. And apparently, all this is the result after having fought in Vietnam.

Now, I still think Asher has inherited some of the genes of his father because he has no compassion for those who don’t want to help him find Ivan. A couple of shot off toes and wildly pounding with a shovel are the result. Because of his deafness and the fear of being called a retard when talking, Asher is deafening silent the entire movie. He doesn’t say a word and he just makes use of sign language and facial expressions. Despite his sound free role, I thought it was a magnificent performance of this for me unknown actor. In addition, Candace Smith and Kevin Gage (as blood brother Tank) are certainly worth mentioning after displaying some brilliant moments.

In hindsight “My father die” isn’t really a stunning film. The storyline is rather weak and the whole story looks like a hodgepodge of random events with terrible brutality not being shunned. Unfortunately, the denouement is a bit exaggerated. It looked more like a modern version of a firefight in an old cowboy movie. I’m not really a fan of this kind of exploitation films about deprived slums where futureless individuals waste their time on useless and cruel activities. And certainly not when the used violence is completely senseless, aimless and indifferent. The film surpasses “American Muscle” easily and tries to acquire a cult status as “Vanish“. I didn’t feel like turning it off and that’s a positive sign. I am convinced that Asher’s last thought contained the following sentence “It’s better to burn out than to fade away”.