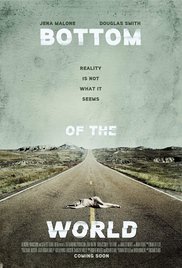 The mysterious disappearance of a young woman leads her boyfriend on a journey for truth and perhaps his own unknown reality in this dark, hypnotic mystery that transcends the limitations of traditional narrative.

Perhaps I’m a weird personality. That’s the reason why I really enjoy movies like “Bottom of the World“. Contrarious, difficult to understand, confusing, and slightly disturbing. As the denouement kicked in and the inextricable story became a little bit clearer, I was stunned. It was undeniably clear to me that I wanted to watch this weird movie again one day. Only to discover other clues. Clues that escaped me. I fully realize that most people who saw this movie, won’t like it at all. Many will see it as a waste of time. A meaningless, dumb film with an incomprehensible storyline.

One absurd fact after another.

To be honest, I had that same feeling after the first 15 minutes. We see Scarlett (Jena Malone) and Alex (Douglas Smith) cruising across the US. Two youngsters in an old,  American car, on their way to L.A. and enduring the scorching heat of the desert. Where do they come from? What goal are they aiming for? And where are they exactly? I had no idea. They decide to spend the night in a strange-looking hotel, with an impressive and magical looking lobby, while the part where the guestrooms are situated, resembles that of a cheap motel. And then one absurd fact follows after another. A local television channel with a pseudo preacher (Ted Levine) proclaiming religious messages. A weirdo who observes their room at night. And then Scarlett seems unable to leave town without feeling as if her head explodes. And finally, she disappears.

Reality or just a dream? Beats me.

And then there’s even bigger confusion when Alex wakes up in a seemingly different life as a married, well-earning husband. Even weirder. The woman living next door is Scarlett. From here on, the storylines seem to twist around another like cooked spaghetti and there are several facts that refer to what’s real. I’m not such a big fan of films full of symbolism and metaphysical states. The makers tried to find a proper balance between reality and a sort of dream phase. In the end, I was wondering which personage actually exists and which personage originated from a subconscious mind. I assume that everything has to do with guilt feelings caused by an unacceptable act from the past. (Think this is a hazy description? Well that’s intentional.)

In my opinion a fascinating film.

Jena Malone is no Scarlett Johansson, but in a way, she succeeded in looking sensual and seductive. On the other hand, she also appears to have perverse traits and you start to question her mental health. The story she tells about her nephew and the way she treated him, isn’t something a mentally healthy person could come up with. Even if its purpose was just to shock Alex. Personally, I thought Douglas Smith acted rather soft and absent. And wasn’t he a bit too young to be a married guy? At first, I thought it was his mother in the kitchen. All in all, a fascinating film that leaves you behind with more questions than answers.