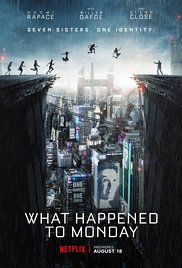 In a world where families are limited to one child due to overpopulation, a set of identical septuplets must avoid being put to a long sleep by the government and dangerous infighting while investigating the disappearance of one of their own.

“We are one human family sharing this Earth.Today, together, we make history.The Child Allocation Act is the first vital step towards preserving our planetand making a better future for our children.”

After reading the synopsis of this film I was instantly excited, because the concept appealed to me enormously. When I watchted the movie “The Thinning” exactly one year ago, I was also curious about the end result because I thought the basic idea was masterly. Unfortunately, in my view it was a failed attempt to launch it as a pilot film to add some brainless sequels. I’m sure they’ve cancelled those plans. Also in “Seven Sisters” (or “What happened to Monday?” as the movie is called in the US), the overpopulation is again affecting mankind. Even worse. Due to climate changes, extreme drought causes a shortage of food. A genetic intervention by science brings solace but has one annoying side effect. The number of multiple births increases drastically. The solution of one problem is detrimental to the other major problem. A new law is being voted allowing only one child to be conceived per family. The illegitimate children are stored by means of a cryosleep until better times ensue, so they could have a future in our world.

But that’s not what happens to the Settman family. The grandfather (Willem Dafoe) ensures that seven sisters grow up in great secrecy. For practical reasons, he names the sisters by the days of the week, so they know at a later age on which day they can leave their home. So seven persons live the existence of one individual. The principle of the notorious three musketeers “One for all and all for one” falls into nothing. Are you an avid fan of Noomi Rapace? You’ll see. This film is the fulfillment of a wet dream. She plays every sister in this family. Each with her own appearance, character, quirks and intellect. You can expect a lot of scenes where she duels with words against herself. A monologue actually made possible by special effects. It reminded me of the tomfoolery Eddy Murphy already demonstrated in “The Nutty Professor“. Though this time it’s not so hilarious and without silly jokes about flatulence.

Entertaining, yet not impressive.

Noomi Rapace played a dazzling role in “Män som hatar kvinnor“. She was captivating in “Dead man down” and impressed in “Child 44“. Here it’s not her acting which is a prominent aspect. It’s the technical high-tech wizardry that ensures that she plays a memorable role. The perfectly edited dialogues and ingeniously put together fight scenes, ensure that she shines on the big screen (in sevenfold). Unfortunately, this isn’t enough to make an impressive film. In the end it’s nothing more than a thriller with science fiction elements. For me, there was only one breathtaking fragment  and that’s the first confrontation between a part of the sisters and those who want to destroy this long-kept secret. Furthermore, it was a very entertaining film. But, and I’m repeating myself, it wasn’t impressive.

The decors looked futuristic enough and reminded me of “Blade Runner” sometimes. The overall setting was perfectly taken care of. Obviously, Noomi Rapace is mainly in the spotlight. As a result the part of Glenn Close, as a driving force behind the government apparatus CAA, and that of Willem Dafoe feel as additional. Especially Glen Close, who again behaves like a true Cruella DeVil, is a rather one-dimensional character. Furthermore, it wasn’t that difficult to guess how the film would end. All in all it felt like the whole film was draped around an ingenious concept and a cleverly thought-out gimmick.