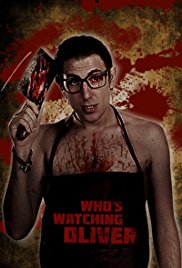 Who's watching Oliver tells the story of a mentally unstable loner lost in a life forced upon him. By night Oliver aimlessly wanders the streets and bars on what can only be described as a truly shocking and humiliating killing spree. His only savior and possible way out of a life he is desperate to escape comes in the form of the beautiful Sophia with her sweet eccentricity and naivety to the danger she has put herself in.

“Who’s watching Oliver” will certainly not be appreciated by everyone. It’s a film about voyeurism, sadism and total insanity. At first sight, the film seems meaningless in terms of content. But as the film progresses, you’ll conclude it contains a more pronounced message. The moment Oliver (Russell Geoffrey Banks) begins to abuse and torture a girl like a madman, under the watchful eye of his authoritarian mother (Margaret Roche), who’s watching the whole show via a webcam, you assume that this is the umpteenth morbid torture film. But as soon as the handsome Sophia (Sara Malakul Lane) comes into the picture, the storyline tilts slightly. From that moment on it is no longer the Oliver who has to tolerate the whims of his mother, routinely take his two pills and goes off to search his next victim. No. Now he’s the Oliver who realizes that there may be a way out of this violent existence.

Now that’s what I call crazy …

Is “Who’s watching Oliver” an excellent film? Well, I wouldn’t say that. But it’s a damn shocking and confusing film. Needless to say that I found the acting performance of Russell Geoffrey Banks sublime. The way he portrays Oliver is magisterial. That foolish expression on his face with his protruding lower jaw and crooked teeth. His silly glasses and backward combed greasy hair. The retarded mumbling and the in-mouth muttering. All this makes him look like a mentally disturbed individual. And the moment he bursts out laughing is both touching and frightening at the same time. The laughter of a fool or a schizophrenic madman. It’s also obvious that Oliver’s condition is directly related to his mother because she’s on the same level. Also a totally insane woman. Even though we see Margaret Roche only on a monitor. The way in which she addresses the victims in a denigrating way and laughs with them felt outright diabolical. And the moment you find out what happened to her husband, you realize just how crazy this woman is.

What does a fine looking girl like Sophia see in that nerd ?

And then you have the naïve and angelic Sophia who spontaneously seeks contact with Oliver in the amusement park. A place where Oliver comes to rest on a daily base. In retrospect, she’s just another restless soul who’s seeking comfort. It’s not that you get a pronounced explanation about her past. But between the lines, you can assume that she also knew a past full of abuse and grief. Why Sophia approached him, ultimately remained a mystery to me. The final scene provides a variety of interpretations. Will Oliver escape from the grip of his mother at that moment? Or did he find his “partner in crime”? Your guess is as good as mine.

A slasher film with a brilliant twist.

And there are more of those ambiguities. Why is Oliver wandering around in Thailand? And where does all that money to lure girls to his room come from? “Who’s watching Oliver” is such a film where you as a viewer can’t predict which direction it’ll go. But if you leave out the explicit nude and bloody scenes, a fragile love story remains. But in a bizarre way. Everything feels rather absurd. Especially with that cheerful jazzy music playing while Oliver chopping up the dead bodies. And the daily trip to the amusement park in this Asian country emphasizes the absurdity of the whole. For those who love slasher films with a psychopathic character whose ruthless behavior causes bloody situations, this is definitely a must see. But this flick gives it a brilliant twist as well. Therefore it’s no surprise this film has already won some rewards at a few film festivals.