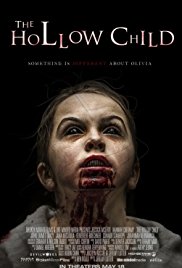 A troubled foster teen, Samantha, works to expose a dangerous supernatural impostor in her new family and rescue her foster sister.

Run before it turns everyone against you.

The reason why I try to avoid seeing trailers is twofold. Or they are so revealing that you actually saw the film in advance. Either the trailer is inviting and arouses your curiosity, but afterward, you come to the conclusion they better limited themselves to making this trailer alone. Better yet. Perhaps they could have made an extended version of it because the film really doesn’t have more to offer. “The hollow child” belongs to this last category. The initial idea had potential. The end result was disappointing again. Or maybe the subject was a little too limited to make a full film of it.

It wasn’t even scary.

I think it’s a bit exaggerated to call “The hollow child” a horror. It was never really scary. And the revelation of what’s hiding in the dark, murky forest was so momentary and so late, that it seemed completely irrelevant. To be honest, I thought the main theme was the daily struggle of Samantha (Jessica McLeod) against the lack of understanding and the desperation about where she could feel at home. It felt as if the disappearing and reappearing of Olivia (Hanna Cheramy), daughter of the foster family where Samantha stays, was just a secondary subject. Although her personality changed. I got more shivers from what Samantha was doing to herself with scissors than from Olivia’s behavior.

Is there also something positive?

But no worries. There are also some positive aspects. The beginning certainly isn’t bad and shows some atmospheric images of the notorious forest where the youngsters walk through after school. Apparently, it’s also an enchanted forest, because after 30 years it still looks the same. Then there’s the acting part. First of all, Hanna Cheramy delivers an admirable performance. For children of that age, a leading role is certainly not self-evident. But it’s Jessica McLeod who deserves appreciation. Her acting never felt forced. The way she evolves from a rebellious teenager to a responsible daughter who sincerely regrets her mistake looked credible. On the other hand, there’s also the irritating acting of John Emmet Tracy, the unsympathetic stepfather and Johannah Newmarch (A ravishing beauty by the way). The latter is portrayed as the crazy woman who burned down her parental home in the past because she claimed her returned sister was an imposter. To be honest, she didn’t look that crazy.

Free time filler or not?

“The hollow child” has its good and bad sides. But what it fails to do, is to create a creepy or frightening atmosphere. It’s far from horror and will certainly not stand out among all other releases. Don’t be misled by the movie poster. This radiates more horror than the film itself. You can call “The hollow child” a drama with some horror elements. And unfortunately, the end was too predictable. So if you have too much free time and you don’t know how to fill it, you could give this average horror a chance. However, I’m sure that afterward, you’ll use a statement that sounds like: “Maybe I should have spent my spare time doing ….“.