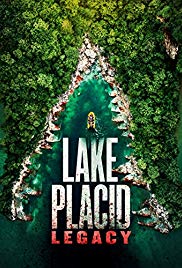 Legacy finds the team of young explorers out to reveal the secrets of an area removed from modern day maps and hidden behind electric fences. However, once they reach the center of the lake, they discover an island that harbors an abandoned facility with a horrific legacy: the island is home to a deadly predator eager to feast on those dumb enough to ignore the warnings.

You people are out of your minds.
The place you wanna go?
It’s off-limits.

This is really the most miserable film I’ve seen this year. Not only the story was totally stupid and completely absurd. Also, the acting was sometimes extremely bad. I’m sure there are local theater associations who could exceed this. Furthermore, there were certain elements in the story which didn’t make sense. And last but not least, the subject this movie was about, was absent almost the complete film. You have to be satisfied with just the head of the monster appearing above the water or an approaching shadow with accompanying dangerous growls. Except during the denouement. At that moment the monster, that makes this island a dangerous place, is to be seen in all its glory. And that’s also such a bad design. It would have been better if they left it in the shadows. As far as I’m concerned, they could have played it with a hand puppet. Probably it would have been the same. Horribly outdated CGI.

No way. There are 6 “Lake Placid” movies?

After watching this film I went looking for more information and came to the baffling conclusion this was already the 6th film about the famous lake. I’d never heard about this franchise before. And after watching this 6th movie, it’s better that way. I don’t feel the urge suddenly to view all other parts. And as far as I could read, the level of the predecessors was of the same caliber. You could say that for example, the “Sharknado” series is the stupidest film franchise of all time. But at least there was humor in it and it earned an unbeatable cult status. I’m sure that won’t happen with the “Lake Placid” franchise. I’m afraid it’ll get the same status as “Dinoshark” for instance. The status of “crap movie of the year“.

In this film, it’s a group of environmental activists who are challenged by a former member. Their actions consist of entering a facility of a dubious company that violates environmental guidelines and animals or human rights. Once they’ve worked themselves inside, they unroll a gigantic pamphlet. In my opinion, a ridiculous statement. But that’s beside the point. And then, when they’ve decided to stop with these activities, they receive the challenge to explore an island where Lake Placid is located. It appears that it would be polluted with chemical or nuclear waste. But as soon as they’ve arrived at the site, they notice there’s no radiation and that an immense lab has been built. And even worse. It appears that a giant reptilian monster is stumbling around on this island.

Go ahead croc. Tear them apart.

And yes, it’s literally stumbling. Because our friend the crocodile isn’t really swift-footed. Not difficult if you are a whopper of 15 meters. The fact that the monster swims rapidly under water is quite evident since he has such large feet. But on land, the thing is ponderous and slow. And yet this creature succeeds in squeezing itself through corridors, stairs, doors, and shutters one way or another. And the unfortunate gang who ended up there can run as fast as they can. This bad boy always shows up back again. To be honest, there were only two persons I hoped would survive. And those were the ex-marine Pennie (Alisha Bailey) and the journalist Alice (Sai Bennett). The rest were just annoying characters who actually deserved to be torn apart.

Is there nothing positive to say about this film? Yes, there is. The film poster looks great and was actually the trigger that made me watch this film. I’m even convinced that most energy has been put into the design of this poster. But in general, “Lake Placid: Legacy” is simply a bad movie. Inadequate acting, a ridiculous storyline and a monster that barely comes into the picture. And when it does, it looks terrible. In short, I hope they aren’t planning to make another sequel. In any case, I will avoid it, if that’s the case.