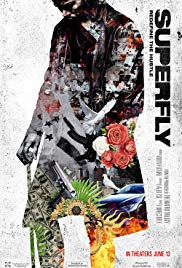 When Priest, a young but experienced coke dealer in Atlanta, realizes it's time to get out of the trade, he risks it all on one last score. Double-crossing his mentor, Priest heads to Mexico to connect with the cartel that serves as the source of his product.

But even more so, God is all-knowing.

And that is what makes him scary as shit.

Do you understand what I’m saying?

This remake of the movie “Super Fly” from the 70s, with Ron O’Neal as Priest, isn’t really my favorite kind of film. There’s already a multitude of this genre of movies. The so-called blaxploitation. Perhaps the older films sketched a better picture of the Afro-Americans whose future wasn’t too rosy. Because of discrimination and racist measures, the possibilities to succeed in life were reasonably limited. Getting involved in criminal activities was therefore self-evident. But I’m sure it wasn’t as flashy and groovy as in this movie. So you can expect to see some nice, expensive sports cars. Golden teeth and golden automatic guns. Leather coats covered with fur and shiny gold necklaces. Decadent parties where dollar bills are thrown around as bread to the ducks. A shitload of scantily clad ladies with a nicely shaped, vibrating butt. A lot of rap music (even at a funeral) and Yo-yo-yo-Bro show off. And of course the expressions “nigga”, “bitches” and “hoes” are frequently used in a conversation. In short, everything that can be seen in a rap music video.

Hey, he does a Marge impression.

The film wasn’t really convincing. The only scene that made me hope for a mega-cool gangsta film, full of uncontrollable violence and big talk, was the one at the beginning where Priest (Trevor Jackson) confronts the rapper Litty with the fact that he still needs to pay him a large amount of money. This was such a moment that I love in a movie. The calm and at the same time threatening attitude Priest exhibits there is entertainment of the highest level. He reminded me a bit of Shaft but this time with an absurd looking hairstyle. It’s very similar to the hairstyle of Marge Simpson. Unfortunately, from here it went downhill.

Not only did Priest’s hair look ridiculous, but his omniscience and how easily the whole mess is being solved was a bit exaggerated. The story of the street-boy Priest who, after years of selling drugs comes to the decision to call it quits, isn’t very original either. He wants to hang up his dealer-robe because diving away from bullets that are fired at a short distance, isn’t that easy anymore for an elderly person. They want to pull off one last deal (and this at the expense of the person who has taken care of him all his life) and then he and his two wives can buy a luxury yacht and retire.

Yep, it’s not a good idea to mess with a Mexican drug cartel.

The fact that he uses a Mexican drug cartel for this, says enough about his credibility. No matter how rational he takes care of his affairs, this proves there’s a shortage of well-functioning brain cells. I’m not familiar with the drugs scene, but I do know that the members of such a cartel aren’t softies to play with. Before you know it, you’ll be hanging decapitated somewhere under a bridge or you can admire the fauna and flora of a river with your feet in a block of cement.

And even though it looks visually professional sometimes (apparently the budget was considerably high), there are so many downsides in this film that it’s almost impossible to take it seriously. Perhaps that was the intention. The chases looked ridiculously amateurish. The scarce fight scenes looked average and felt old-fashioned (even the sound effects didn’t help). Trevor Jackson manages to play the cold-blooded drug dealer, but otherwise, his character is so clichéd and two-dimensional that it seems pretty ridiculous. Not to mention his employees. And the most hilarious are the two corrupt detectives and the mother of Gonzalez. If you need a textbook example to explain the word caricature, then they are the most suitable subjects to do this.

No, for me this movie wasn’t a success. Are you looking for something to fill up your free time? Well, this flic is useful for that. However, the only exciting thing in the whole movie was the shower scene. Even though it felt like it was a compulsory act to fill up the movie with. It really didn’t impress or surprise. In short, the film wasn’t really “Superfly”.