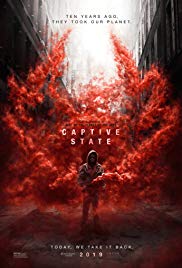 Set in a Chicago neighborhood nearly a decade after an occupation by an extraterrestrial force, 'Captive State' explores the lives on both sides of the conflict - the collaborators and dissidents.

When I saw the trailer of “Captive State” for the first time, I was immediately overenthusiastic. It seemed like a suspenseful and action-rich Science Fiction about extraterrestrial dominance and their reign. I already imagined myself a kind of movie as “Independence Day” or “War of the Worlds“, with a sophisticated storyline as presented in “Arrival“. Added to this is the existence of a rebellion of individuals against this alien occupation. And last but not least, they managed to get John Goodman to play one of the key roles. The very first thing that occurred to me was that I certainly wouldn’t let this film pass me by. This film was the reward after having to watch crap movies as “Occupation” and to a lesser extent “Beyond skyline“. After seeing this “as I imagined” incomparable film, I had to conclude that my enthusiasm had dropped below freezing.

What’s it about anyway?

I’m sure there was a shrewd story somewhere deeply hidden. And yes, the ending was ingeniously conceived. But you have to wait an enormous amount of time before you realize what’s really going on. The entire setup only becomes clear at the very last minute. That means you have to have a good portion of endurance. Because this movie isn’t really captivating (pun not intended). It’s rather confusing and vague. And if you’re eager to see aliens at work, you’ll be disappointed as well. There are only a few vague, dark images. Not that it’s really necessary. The opening scene with the parents of young Gabriel (Ashton Sanders) and Rafe (Jonathan Majors) being pulverized, shows already how all-destructive and invincible these cosmic rascals are. The rest of the film you see those creatures in semi-darkness while producing creepy insect-like sounds. They look like a giant cactus. And you’ll also see a kind of flying drones with a flesh-like suction cup. However, their function wasn’t entirely clear to me. Well, there were more unclear things.

The originality of this film lies in the relationship between humanity and these invaders. In one way or another, they’ve managed to make humanity take a submissive attitude. The choice was probably limited: accept their authority or total destruction. The result is a run-down society that tolerates despotic rules. The aliens have buried themselves in the centers of world cities behind an immense wall where only certain authorized persons are allowed access (To receive instructions and report on the situation, I suppose.). These “closed zones” serve as mines to plunder earth’s resources. After the intriguing start, however, the film falls into a politically charged story about limited civil rights, economic decline and bureaucratic juggling in which privileged people are richly rewarded for their cooperation. The emergence of a resistance movement is a natural result. But it’s brutally suppressed.

And that’s where John Goodman comes in. He’s a detective who’s determined to clean up the “Phoenix” group once and for all. He follows Gabriel’s movements in order to track down and eliminate these resistance fighters. Everything for the greater good. All in all, this entire operation is initially fairly incoherent and difficult to follow. His relationship with a prostitute (Vera “The Conjuring” Farmiga) seemed unimportant at the beginning. The use of alien explosive technology wasn’t really clear to me either. And wasn’t it so that the entire human civilization was stripped of any technological ingenuity? Gabriel’s work included, for example, the systematic destruction of SIM cards from mobiles. And yet the law enforcement agencies work with a sophisticated tracking system and face recognition. Or was this a technology from the alien rulers? In terms of communication, they made more progress than in “Arrival“. Here, there are already interpreters who actually understand and translate the clicking, scraping, and hissing of the aliens.

I should hold on to avoiding trailers.

Again, I understand that with the ultimate revelation everything becomes clearer. And when the ultimate message hits in, you’ll be awestruck. But almighty, you cannot really call the film fascinating. Perhaps you watch it rather passively because you’re kept in the dark for so long. The film deals with aspects such as resistance movements, political compromises, and self-sacrifice for the greater good. I don’t expect a film which tackles the subject of an extraterrestrial invasion, to focus only on these aspects. Yet again another proof that trailers aren’t always an accurate representation of the final film.