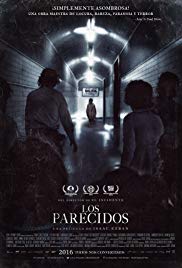 On the rainy night of October 2, 1968, eight characters waiting on a remote bus station for a bus heading to Mexico City start experiencing a strange phenomenon.

Uh, I’m not entirely sure what I just watched, but it wasn’t horror for sure. A kind of “X-files” story that takes place in Mexico. And they gave it a typical retro look from the 50’s/60’s. The story itself is completely nuts, psychic and totally whacked. I don’t think it’s possible for another movie to be more absurd than this one.

The movie had a direct line to my funny bone. Those old-fashioned sixties posters with Marilyn Monroe and The Beatles really made me laugh. But I really didn’t like this film with its hysterical acting all the time. It’s clear that Mexicans aren’t really kind to each other. And they are just as hyperkinetic and noisy as the Italians on the other side of the ocean. I’m sure that I won’t remember what the film was about the day after.

You can watch Los Parecidos on Netflix now!