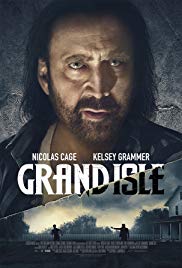 A young father is charged for murder and must prove his innocence through recalling a very twisted and dark night of events.

Go ahead and take her.

But I’ll tell you this.

She got a dark side… Darker than hell.

I admire the phenomenon called Nicolas Cage enormously. Every film with him (and nowadays it’s a lot every year) is a mandatory watch for me. I really can’t let a single Cage movie pass by. Even though I know that more than half of them are of a dubious level. And some downright bad. And yet there are sometimes gems in between. Now, “Grand Isle” certainly isn’t the pinnacle of his film oeuvre. It’s rather mediocre. The run-up is promising. The concept had potential. And Cage is having a blast with his role that fits him like a glove. Add to that a bitter Milf, a young handyman whose hormones are going berzerk and “Frasier” as a biased, god-fearing detective who would prefer to put the suspect on a stake, and you still have enough material to make something out of it. It all looks reasonable. Until halfway somewhere. And then the movie transforms to the level of an average C film. Unfortunately, the presence of such a cult figure as Cage couldn’t change that.

Alcohol and a Nam past. Bad combination.

And to think that a white fence is the beginning of all the misery for Buddy (Luke Benward). Such an innocent item with far-reaching consequences. The way in which this fence was damaged, on the other hand, is not so innocent. Not difficult when the owner of the house is an ex-marine with a serious drinking problem. Walter (Nicolas Cage) is a bitter, fatalistic persona. A bit of a crazy person who still can’t get over the fact that he got wounded in Vietnam in a ridiculous way and returned home while his platoon went on a mission the next day. The disappointment was immense. Even knowing that the entire platoon got eliminated completely a few weeks later, the disappointment about a missed opportunity remains. This pent-up anger in combination with excessive alcohol consumption makes him an unguided projectile. His mood, grumpy reactions, and downright aggressive attitude make him an unpleasant person.

Walter also doesn’t treat his other half kindly. She’s a mature diva whose body shapes are extremely well preserved and whose libido clearly hasn’t disappeared yet. And let that be exactly what Walter fails to deliver. He won’t even budge when she shows up in a transparent nightgown with erotic underwear underneath it. A disinterested look and another sip of a glass of whiskey are the only reactions. It’s not without reason that this hot woman sets her sights on the young, muscular handyman. A handyman with a sex life on the back burner since his lovely wife gave birth to a cuddly daughter. And just when you think it’s going to be about a dangerous triangular relationship where the psychopathic-looking husband wants to initiate a lynch party, the young handyman sits at the police station, face bloodied, trying to prove his innocence in a murder case.

Indeed, Walter is really the kind of character that has Nicolas Cage written all over it. The manic mood. Maniacal laughter. Medium length, greasy hair, and a rough stubble beard. The constant drinking and the half-awake state he’s in practically all the time. And it’s not the first time Cage played such a person. In short, it feels familiar to see him that way. The most interesting interpretation, however, is that of Kadee Strickland as the voluptuous Fancy. Every time she’s in the shot, you simply feel the erotic tension increase. Her sultry voice and sensuous appearance ensure she demands all the attention. Unfortunately, Luke Benward could not compete with these two heavyweights. And although he actually plays the main character, it felt like his part was less important.

As I said before, the format of the film is only half successful. It seemed to be heading in the direction of a “Basic Instinct” -like, erotic thriller. Only the eroticism and the thriller section remains below par. And you get a rather absurd conclusion. Also, the dark secret of this demonic couple is presented so casually that its impact is negligible. And let’s not forget about the intervention of the police. You really can call this part quite ridiculous. Furthermore, the movie is peppered with improbabilities. Such as that small detail from the testimony that cannot even be verified immediately. But still, it ensures that the biased inspector makes a 180-degree turn immediately. It’s amazing how someone’s beliefs can change so quickly. And the end of the film is simply terrible. Apparently even the marine uniform Cage was wearing, was also completely wrong. Again proof that quantity and quality aren’t related. If you are an immense Cage fan, you should watch it of course. Unfortunately, “Grand Isle” isn’t really grand after all.