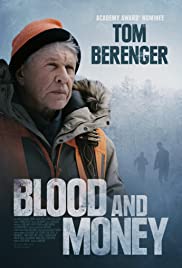 A retired veteran hunting in Northern Maine stumbles across a dead woman and a large sum of money.

I just want to get out there and bag my buck.

If you start watching this movie without any prior knowledge, you’d swear it was a flick from the 80s. A film period in which Tom Berenger also played in old-fashioned crime pictures such as “Someone to watch over me” or “Shoot to kill”. I’ll always remember this actor as Sergeant Barnes (the ruthless soldier with a hideous scar who wanted to kill all Vietnamese, no matter what age) from the legendary Vietnam film “Platoon”. It’s true that this all-rounder was a lot younger in this war movie. Tom Berenger has reached the blessed age of 71 this year. But that didn’t stop him from stumbling through the icy landscape of Allagash (a town in the North Maine Woods region) in search of game.

An old man with a heavy mental burden.

And you can take that stumbling literally. Not only is he an elderly man. Apparently he also suffers from a disease that causes him to cough up blood from time to time. So for Jim Reed (Tom Berenger), it’s a tough job to move through the thick snowpack. In addition, Jim also carries a very heavy mental burden. As the film progresses, this dark secret is revealed little by little. The fact that you see him attend an AA meeting gives you an idea of what’s the source of all his woes. An event that caused this ex-Marine to lose a beloved family member and the rest of his family refusing any contact with him. Actually it’s something similar that Rayborn is going through in “The Silencing”. Coincidentally a movie I’ve seen only recently.

“Blood and money” is a terribly slow film. In the first part, we get to know Jim who’s hunting for deer in the vast nature reserve. You witness the solitary life he leads in his converted camper. And the friendly relationship he has with the not so unattractive waitress Debbie (Kristen Hager) in a diner. A desperate woman who would like to leave that godforsaken place and who also has her domestic problems. And then there are the occasional talks with a kind of forest rangers who register those who enter or leave the nature reserve. In short, little to get excited about. Until Jim spots the deer he’s so desperately looking for. He aims and fires a fatal shot. Unfortunately, there won’t be a juicy piece of deer meat on the table during the Christmas season. Because he accidentally shot and fatally injured a woman. And when turns out she’s a member of a gang who just robbed a casino and Jim finds a gym bag full of dollar bills next to her body, you expect the movie to get more action-packed and exciting.

Well, that’s what you expected. Right? Forget it. That’s only partly true. It won’t become an impressive or spectacular movie after all. In the first place, you can’t expect a retired hunter with walking difficulties to behave like a crafty, in-shape kind of Rambo. I also had the impression that he always traveled the same route on a limited square kilometer. The advantage is that you can enjoy the idyllic snow landscape immensely. But I’m sure most viewers expected a different kind of entertainment than beautiful “National Geographic” footage. And secondly, you can expect really idiotic bad guys who, provided they had a certain amount of intellect, could have easily overpowered this old guy. The way they were tricked by him sometimes, was downright laughable. Besides finding the bag of dollar bills, Jim isn’t exactly born for luck either. You’ll figure that out every time he manages to capture a weapon.

It was kind of mediocre.

“Blood and Money” won’t leave an everlasting impression. The story itself is nothing new. Only Tom Berrenger makes an impression, given his age. A character role pur sang. Unfortunately, they were unable to go into his personality deep enough. What happened to him in the past remained rather vague. Furthermore, the action part seemed rather amateurish. So it felt like a mediocre film. If you admire Tom Berrenger, you should of course watch this one. However, there are better thrillers that also take place in a snowy landscape.