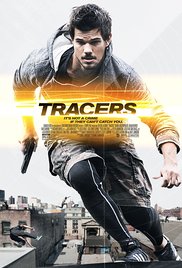 Wanted by the Chinese mafia, a young New York City bike messenger down on his luck who just wants to do good, escapes into the world of parkour after meeting a beautiful stranger and her group of Parkour trainers that get him involved in a criminal delivery service for extra money.

I have difficulties to classify “Tracers” in the right category. Was this a terrible crap movie? One that merely serves as a filler of unspecified leisure time? Or was it still a movie that was relaxing enough to demand my full attention? Eventually, I need to say “Yes” to both questions (although the second one will be a mild “yes”). On the one hand, I could label it as a useless pastime. Now, the fact that Taylor Lautner, widely known of the “Twilight” saga, plays a part in it, should make an alarm bell go off. He’s not being asked because of his acting performances. It’s more likely he’s being asked for his attractive looks and athletic body. A kind of human magnet to ensure that hordes of teenage girls sprint to the cinema halls. It was within expectations that the result wouldn’t be very original. Again you’re presented the well-known story with two fresh-looking teenagers accidentally bumping into each other (literally), getting together, and going through some perilous situations. Initially, there will be one acting dismissive and in the end, everything is hunky-dory and they save themselves out of their predicament. Happy End, smacking kisses and with lots of butterflies in the stomach, they are off to a bright future together. At that level, it’s a first-class film. First-class boring.

On the other hand, it’s an energetic action movie full of smooth and action-packed moments. It wasn’t that boring (if you forget about the childish and stupid storyline for a minute though) to my surprise. “Parkour”, a discipline which originated in France, plays a central role in this film. Large parts of this film show how practitioners of this sport jump, roll, and balance through the streets. And this of course in the smoothest way. All this is neatly portrayed without the viewer getting seasick because of the swirling camera. The philosophy of pushing your limits is also emphasized enough. Although it sometimes looks like a well-prepared circus act where they used cleverly camouflaged trampolines. But besides the admiration for the daredevil stunts these young people performed, there wasn’t much to admire anymore.

Cam (Taylor Lautner), an enthusiastic bike messenger, risks his life on a daily base while cycling through the streets of New York to deliver packages. Until he bumps into the lovely Nikki (Marie Avgeropoulos). Immediately this bouncing chick makes an immense impression on Cam and at the same time leaves him behind with a double folded front wheel. But no worries. The next day a brand new racing bike is delivered at Cam’s work. A gift from Nikki who obviously couldn’t sleep because of all-consuming regret. However, there’s one annoying problem Cam’s saddled (how appropriate) with. The huge sum of money Cam has borrowed from the Chinese mafia. An obvious fact that he borrowed it from them. At that time all financial institutions were probably on vacation and he needed the money urgently (And I’m still wondering why he needed 15.000 $ and where he spend it). In time he becomes a member of the group of young people led by Miller (Adam Rayner) who also runs a sort of courier service. The big difference is that they know the contents of the packages and make a lot more money with it. You don’t need to be very clever to guess which decision Cam makes since he feels that Chinese hot breath on the back of his neck.

At first glance, it looks like an episode of “The Little Rascals” but with slightly older rascals who have lots of fun horsing around. The movie needs a very fast pace apparently, looking at the names being used. You can read the full list at TGV speed: Cam, Nikki, Miller, Dylan, Tate, Jax, Jerry, Hu, Angie, Joey, Chen, … Monosyllabic names so there isn’t any time wasted when shouting at each other in a critical situation. Taylor Lautner has the charisma of a freshly baked pancake. If he didn’t have such a trained body with relatively developed biceps, you could slide him easily under a door. Physically he didn’t change much since the last time I saw him acting (cough) in “Abduction” (Actually, also a movie you’d better forget). And the few pubic hairs that grew on his face, won’t help much either. He still looks like a teen.

Similarly, the graceful Avgeropoulos, whose name sounds more mature than she looks. At times I wondered if it’s illegal to undertake such activities with someone like her in the state of New York, because she still looks like a minor to me. A spindly little girl with an angel face and a fit and graceful body. The lack of female basic components was a plus for her as a “Parkour” adept. And correct me if I’m wrong but is this “Parkour” business extremely easy to learn? I guess so. First and foremost you have to be physically in top form. And besides that, you must have a smartphone so you can use your 4G connection to watch instructional videos on “YouTube” and then firmly exercise by jumping against walls and trees, conquer banisters and run over roofs. Occasionally crashing on the ground, is part of it of course. I suppose it’s that simple, since Cam also got the hang of it this way. And finally, Miller, the mastermind behind the whole operation, isn’t such a smart guy either. He only has two rules members should adhere to, and he can’t remember both of them eventually.

Teenage girls will crawl into their bed pretty excited after watching “Tracers“. Admittedly I can imagine that this will appeal to a large market share and that it was quite attractive for the creators of this meaningless film to start this project. Personally, I found it a typical product of today’s consumption society: view it, digest, and forget. The day Lautner loses his sixpack, it will be extremely difficult for him to get certain roles, I fear. I’m sure that when you register at some sports club in the future, you’ll get this movie as a free bonus together with a bunch of drink tickets and an XL towel. The only thing I missed at the beginning of the film was a “Do not try this at home” warning as in Jackass!