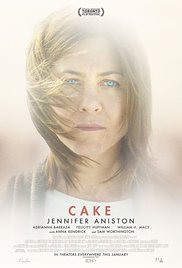 The acerbic, hilarious Claire becomes fascinated by the suicide of a woman in her chronic pain support group. As she uncovers the details of Nina's suicide and develops a poignant relationship with Nina's husband, she also grapples with her own, very raw personal tragedy

“Way to go Jennifer“. For me, she’s the first one who succeeds in removing the yoke of the sitcom “Friends” and play a character that doesn’t remind you of that caricature appearance she played in it. Look at David Schwimmer in “The Iceman” and you see Ross with a wrong, fake mustache. Even Matthew Perry can’t hide the characteristics of Chandler in “Numb“. Lisa Kudrow tries in “Scandal” to resemble an extremely cool and tough presidential candidate, and yet you expect a crazy remark followed by that wonderful bizarre giggle. And Jennifer Aniston couldn’t put the Rachel-type aside in “The Break-Up” and “We’re the Millers“. But in “Cake” she succeeded in that above all expectations. She delivers a sublime and admirable performance here as Claire Bennett. A scarred woman, physical and psychological. You can see the pain in that tired look and those languid eyes. Even the sneering and cynical humor that she uses, can’t cover up the agonies she’s suffering from.

After a fatal accident, Claire stays behind all alone, with visible and invisible scars. A mangled body patched up afterward. But she can no longer enjoy life to its full extent. And there’s also the unbearable pain caused by the loss of her son. The result is a bitter, suffering, and obnoxious woman abandoned by everyone. The support group prefers her to seek a different kind of help because of her anger issues. The physiotherapist is giving up on her because she has the impression that Claire doesn’t want to rehabilitate. Her husband left her for an unknown reason. Is it because of her moods and harsh remarks? Is there some reproach? Has Claire thrown him out because she doesn’t tolerate pity? We can only guess. Similarly, the conditions or the cause of the accident are unknown. The only one who sticks to Claire, is her faithful housekeeper, the likable Mexican Silvana.

It’s a magnificent portrait of the life course of a presumably wealthy lawyer who slowly but surely sees everything collapsing around her due to the traumatic event. Both her marriage and professional career falters while she’s losing herself because of the amount of painkillers and sleeping pills she’s taking. What’s left is a human wreck without any zest for life. There’s only one critical element missing: the courage to finally put it to an end. A backbreaking attitude to life with pent-up grief and eternally recurrent pain as a central issue. You can truly feel the pain. And this all is perfectly played by Jennifer Aniston, who isn’t worrying about a perfect makeup and a flashy hairstyle which would be massively hyped afterward. Her appearance always looks as if she just crawled out of bed after a sleepless night. A face battered by scars, unkempt messed up hair and shabby clothes. A depressed and weary bitchy woman. But one who occasionally brings up funny and sarcastic remarks.

Gradually Claire expresses interest in a participant from her support group who committed suicide and it seems to be her ultimate salvation. Is it the drugs that cause Claire to start hallucinating about Nina (Anna Kendrick)? Or is her subconscious the reason? Whether appropriate or not Nina appears and tries to convince her to take that final step.

Claire is intrigued by the character Nina and starts digging in her life. Finally, she meets Roy (Sam Worthington), which is the start of a slow recovery. Maybe it’s all a bit too much peppered with poignant clichés that’ll ensure some sad moments filled with tears, but overall it was a bold and moving portrait of someone torn apart by grief and pain.

Perhaps an Oscar nomination was worthwhile. At least Jennifer Aniston got nominated for a Golden Globe. And by the way, well deserved. This “Friends” star delivered a terrific performance as the distraught,addicted-to-pills woman. And speaking of the symbolic meaning of the movie title, this is subtly revealed at the end. Splendid movie. And also because of leaving out sensational footage of the accident. An admirable choice that only strengthens the whole!