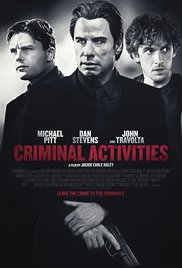 Four young guys reunite at an ex-classmate's funeral. One mentions to the others inside information on a stock that is a guaranteed lock to make them instant millionaires. Unfortunately, the deal goes south along with their investment. Things go from bad to worse: one of them borrowed his share of the money from a mobster.

John Travolta standing in the middle of the cover in a “Pulp Fiction” -like-pose and according to the brief description he has something to do with the mob. He’s flanked both by Michael Pitt, who I saw recently playing in the grandiose films “I origins” and “Rob the Mob” and by the alertly looking Dan Stevens. And all this directed by the versatile actor Jackie Earle Haley. It all looked promising. However, the end result is as horrifying as Freddy Krueger himself. A pseudo crime story full of irritating dialogues, nervous characters, and a complex denouement. But don’t panic. Everything will be explained comprehensively in the end. A kind of brief guide for those who didn’t understand it, entitled “How to screw your friends for dummies“.

It all starts at the funeral of a mutual friend from Zach (Michael Pitt), Warren (Christopher Abbott) and Bryce (Rob Brown). The three former schoolmates organize a private after-funeral gathering in a bar where the rather timid and nerdy Noah (Dan Stevens) shows up. Quickly you’ll notice that Noah used to be the poor bastard they picked on during college time. He’s called, somewhat contemptuously, “poodles”. While enjoying a joint, Noah tells them he got a golden tip about shares of a pharmaceutical company. Thanks to a little foreknowledge, this could be a lucrative proposition for them. However, since those loud-mouths don’t seem to have the right amount of money, Noah proposes to give them the necessary money in advance. And you’ll never guess what the outcome will be. Yep, how’s it possible. It goes horribly wrong. The CFO is arrested for fraud. The shares are worthless. And apparently, Noah borrowed the money from the mob.

Enter Eddie (John Travolta). The quiet, calculated and thought out mafia type who, while enjoying a cactus cocktail, explains to them what the options are. Or they cough up the amount due. Or they’ll take care of a small matter. Namely the kidnapping of Marques (Edi Gathegi), the brother of a drug dealer to whom Eddie’s coke-snorting brother owes a lot of money. To put some pressure on them, the drug dealer kidnapped their niece. The brother could then be used for an exchange. Still following? Trust me, it gets even more complicated as the film progresses.

The most successful performers in this not so successful film (in my opinion) are undoubtedly Travolta and Gathegi, although Travolta also suffers from the illustrious “Bruce Willis disease”. First, there’s a short opening scene he appears in, followed by a long absence and finally a reappearance during the denouement. And yet his short performance was excellent. Although the attempt to reach the same level of humor as in “Pulp Fiction“, didn’t really work out. Gathegi only had limited working space, because he was taped to a chair the whole movie. But his defiant tone and manipulative teasing all the time was amusing enough. The rest of the cast just looked like a neurotic and panicky gang. Gradually they start realizing they ended up in a shitty situation. And this leads to lots of cursing, bickering and shouting back and forth (using the f-word an awful lot of times).

What we get is an amateurish kidnapping that takes place in a confined space with forced dialogues. And also a reasonable failed attempt to imitate the chemistry in dialogues as we know from “Pulp Fiction”. Everything feels a bit flat and pointless. The only reason why it’s so meaningless is that the denouement should blow you off your socks. The calm before the storm. The only lesson to learn here is that you should always treat others with dignity. You’ll never know how it could backfire on you.