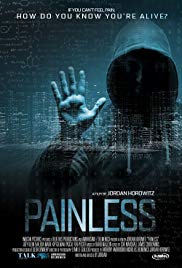 Henry Long desperately seeks a cure for the condition that leaves him unable to feel physical pain.

Every once in a while, nature makes a mistake.

The beginning explains a lot. First, footage of an adorable-looking 2-year-old, growing up and having one injury after the other. And again and again, you get this emotionless stare because he turns out to be numb to pain. In addition, there’s an increasingly desperate-looking mother. And finally, that picture of a little boy in plaster staring sadly ahead while in the background children enjoy themselves in a playground. Perhaps this little boy realizes at that moment that his life will be very different from that of an average person. And that’s how you’ll see the grown-up Henry (Joey Klein) afterward. A person who lives completely isolated and who moves carefully through society every day. Taking with him a backpack stuffed with attributes to take care of injuries. The only thing he’s trying to produce in his as a lab equipped apartment is a medicinal product. Not to treat pain. But something so he finally can feel pain. A vital signal that the human body passes on to indicate that something isn’t right physically. A medicine so Henry has the feeling he’s really alive.

“Painless” is not SF, even though I don’t know whether there are people in the world who suffer from the same condition as Henry or not. I’d rather call this film a drama with a scientific undertone. Because believe me, a lot of Chinese sounding medical terms will be fired at you. Technical terms about chemical compounds and genetic stuff are used throughout the whole movie. No idea what education Henry has followed. But it’s clear he’s a genius in the field of science. He also appears to have an unprecedented gift that allows him to diagnose a person’s condition with a single glance. This all makes this film rather boring sometimes and too intellectual. It feels as if you are looking at some scientific program. Something only real nerds like to watch. And they get excited about every scientific term that’s being used. Yet there’s something else to be enjoyed for ordinary people without a master degree. Someone like me for instance. And that’s the wonderful acting.

The acting is absolutely superb.

Joey Klein delivers a great performance. The way he shapes Henry is simply brilliant. The unworldly loner who looks shyly around and who avoids any contact with other individuals. The only one he has regular contact with is his doctor Dr. Raymond Parks (Kip Gilman). Probably someone who took care of Henry countless times after yet another incident. He’s also Henry’s confidant. So regularly Henry storms into his office without asking, just to argue about a new theory. In my opinion, it’s also the only one who fully understands Henry. And then one day Henry meets the graceful Shani (Evalena Marie). A painful encounter (there’s hot coffee involved) after which he comes to the realization that there’s more to life than his eternal search for a cure. It’s painful to see how clumsy he is when interacting with others who don’t have a medical background.

A scientific drama with a romantic twist.

“Painless” is about the absence of physical pain. It’s also about the numbing effect this had on the emotional part of Henry. He’s just as insensitive when it’s about emotions. The way he responds to certain situations shows a social ignorance and a lack of experience in the field of human interaction. For him, everything is a distraction that prevents him from finding a solution for his ailment. “Painless” is certainly not an action-packed and adventurous blockbuster but still an interesting film. It shows how persons with a disorder still can function in our society. And even though you usually don’t understand what they’re talking about (thanks to the frequent use of medical and scientific terms), you can understand Henry at the end. “Painless” is about perseverance and determination. But at the same time, it is also about loneliness and sorrow. In short, a scientific drama with a romantic touch that surprised me.