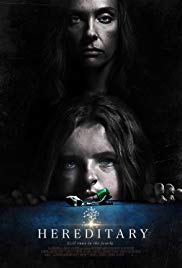 When the matriarch of the Graham family passes away, her daughter's family begins to unravel cryptic and increasingly terrifying secrets about their ancestry.

If you could have just said, “I’m sorry”, or faced up to what happened.

Maybe then we could do something with this.

But you can’t take responsibility for anything!

Because nobody admits anything they’ve done!

“Hereditary“. A film I was really looking forward to and expected a lot from. Unfortunately, it was kind of a disappointment. If it would be a psychological drama that concentrated on the traumatizing effect after the loss of a relative with a labile mother as a result, I would have liked it. The fact Annie (Toni Colette) doesn’t have a stable and healthy mind is actually not that surprising. Not with a psychotic depressed father who starved himself. And a schizophrenic brother who hung himself in his mother’s bedroom. And a dominant mother figure that, in my opinion, couldn’t think clearly. Annie’s mother isn’t really clearheaded when you see the diorama with Annie breastfeeding her daughter. At least if this diorama displays how it happened in reality. And they generally do. A person would go nuts for a lot less.

And Annie also goes completely through the ribbon after the terrible accident that happens to her daughter Charlie (Milly Shapiro). A strange little girl with a downright peculiar appearance. A regrettable and mind-boggling accident. And her brother Peter (Alex Wolff), can hardly be blamed. Maybe he should not have left Charlie on her own that night. Leaving her so he could smoke some weed with a nice girl from his class, isn’t only bad for his health. It also results in this dismal accident. An impressive moment of acting and at the same time a heavy emotional event that’ll get under your skin. No, this film isn’t about scary and blood-curdling scenes. Not initially, that is. It’s the grief for those who died, that makes the most impression. You’ll be struck by an uncomfortable feeling when you hear Annie screaming and crying. A sound like nails on a chalkboard. And you’ll feel sorry for Peter who doesn’t know what to do with his sorrow.

Not an easy movie.

“Hereditary” isn’t an easy movie. Emotionally you are dragged back and forth. Just like the members of the Graham family. A mother who has been traumatized by her past. Husband Steve (Gabriel Byrne) who looks at everything in a passive way and actually has no idea sometimes how to deal with the situation. And the son Peter, whose bond with his mother comes across as reasonably dysfunctional, tries to soften his frustration by using mind-altering substances. And then there’s Charlie. A little girl who clearly lives in her own universe. And above this dislocated family the spirit (Not literally! Or maybe it does.) of a seemingly tyrannical and dominating grandmother floats around. A woman who also had an unhealthy interest in the occult.

“Hereditary” knows how to keep the suspense alive in a smart way. The mysterious mood is constantly present. It’s also a terribly slow film with an enervating soundtrack in the background. At a certain moment, you don’t know what makes you nervous the most. The whole atmosphere or the slow pace. What I do hate a lot, is the exaggerated hyping of movies like “Hereditary“. According to their crafty marketing department, this would be the most terrifying horror film of the last 50 years. Even scarier than “The Exorcist“. This ought to be correct if you read the press releases. People are fainting and are leaving the theater massively because it’s so scary. Maybe that’s why you’re feeling tense. Even when the movie just started. Trust me. Apart from a few explicit graphic shots, it’s all reasonably suggestive. “Hereditary” is again such a horror movie with a double meaning. A movie that pushes your feeling in a certain direction and finally has such a twist that you are totally lost. A film that simply begs for a re-watch so you might discover the missed hints. And that, fellow moviegoers, is something I never do and I’m not planning to begin with in the future.

Highlight: the acting of Toni Collette.

Don’t get me wrong. This is a gem when you look at the cinematographic part and the acting. The way in which everything is depicted is simply fantastic. Sometimes it might be a bit exaggerated so that you get a multitude of painfully slowly zoomed in images. But in general, it’s a pleasure to watch and a continuation of the wonderful footage from the intro. Toni Colette plays a major role in this film (with the dinner scene as highlight). It’s certainly not easy to play such a tormented soul. A beautiful performance delivered by this actress (even though she already convinced me of her acting talent in “Miss you already” and “Please stand by“). And it remained mysterious and ominous until it escalated at a certain moment and evolved into a sort of “The Lords of Salem“. And when you reach the end you’ll probably conclude that it’s indeed advisable to watch the film again so you can rediscover certain clues. But again, that’s not my cup of tea.