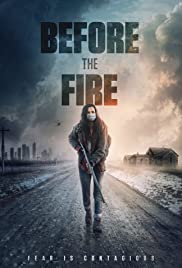 When a global pandemic forces a TV actress to escape to her rural hometown, an intruder from her past proves as dangerous as the encroaching virus.

The virus has not spread there yet.

And then as soon as it’s over we will come right back home.

There’s one admirable fact when it comes to the movie “Before the fire” and that’s the prophetic nature of this movie. When the film was released in the UK and US, we were only at the beginning of the global COVID-19 pandemic as we know it today. Nobody thought that things would go so fast with only about a hundred infections in these countries at that time. Now 6 months later, we have millions of infections, and these countries are at the forefront when talking about the number of cases. Actually, this was the most terrifying part of the movie. The uncanny realism and the similarities with the current world we live in. The beginning of the film shows how panic slowly takes over a country. News reports that are gradually sounding more threatening. Supplies and resources are slowly depleted. Closed or jam-packed motorways. Airports where scheduled flights are canceled. And a lot of people who leave their possessions behind because they reside in a part of the country where a virus outbreak causes victims. To a greater extent, it’s comparable to the situation at the start of the COVID-19 crisis.

Like everyone else, Ava Boone (Jenna Lyng Adams), a well-known TV actress, and her boyfriend Kelly Rhodes (Jackson Davis) are trying to get out of Los Angeles. Kelly manages to get a flight through an acquaintance who owed him. Only he manages cunningly to make sure that only Ava is on the plane so that she can sit out the epidemic in a safer place while he, as a journalist, handles an assignment to make a documentary about the pandemic. Ava’s problem, however, is that she’s returning to her hometown, which she left with Kelly for a variety of reasons years ago, and is forced to move in with the Rhodes family. Something she doesn’t feel like doing because according to her the Rhodes family hates her. All in all, turns out it isn’t so bad there. The relationship with her relatives, on the other hand, is a whole other thing. Needless to say, her relatives are the ones causing massive problems.

Oh, the pandemic is still raging across the country?

So “Before the Fire” isn’t an apocalyptic film that focuses on the outbreak of a pandemic. Once Ava has settled with the Rhodes family and, to pass the time, lends them a helping hand at the farm, the film transforms from an SF/thriller to run-of-the-mill family drama. I believe that the label “Fiction” is outdated due to the current world situation. And you can’t call it thrilling or exciting either. Even the amount of action is fairly limited. “Before the Fire” is more about opening old wounds from the past in a country where lawlessness reigns thanks to a chaotic health situation. The fear of coming into contact with infected people who ignore the quarantine measures is the only evidence that there’s still global contamination happening. The fact that civilians are suddenly forming militias and taking justice into their own hands is a more dangerous situation for Ava. Why she had problems in the past with the Rhodes family and especially with her father, is nowhere explained. That’s regrettable because that would make it all a bit more understandable.

A slow-burner that fascinated me.

Even though “Before the Fire” is a slow-burner and a not so very innovative film in terms of a storyline, it still managed to fascinate me in a certain way. Mainly because of the acting of Jenna Lyng Adams (who also wrote the script) and Charles Hubbell. Two extremely emotional roles. Especially the interaction between Ava and Max (Ryan Vigilant) is convincing and brings out the positivity in a life-threatening situation. Ava’s father, on the other hand, is the personification of how such situations can bring out the bad in a person (or justify it). No, you can’t call this film bad. Only the movie poster could put you on the wrong track. Many will be disappointed because their expectations are not being fulfilled. Don’t expect a “Contagion” kind of movie. No way. In “Before the Fire” the epidemiological aspect shifts to the background and makes way for a family survival drama. Slanderers might even say that the part about a virus outbreak was added afterward to give it a more contemporary and current feeling. I wouldn’t dare to say that though.