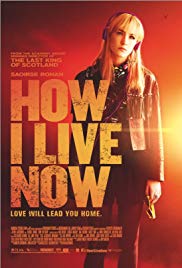 An American girl, sent to the English countryside to stay with relatives, finds love and purpose while fighting for her survival as war envelops the world around her.


Film Review: How I live now

“How I live now” is an impressive, haunting and depressing film. An adaptation of a novel written by Meg Rosoff. I had no idea what this was about. The actual reason why I wanted to see it, is the fact that Saoirse Ronan played in it (I know. I’m a little biased). I saw her for the first time performing in “Hanna” and was immediately enchanted by her naturelle look and the professionalism she showed in her acting. As if she was already a seasoned old-timer from the movie business. When I saw her in “Byzantium” and “The Host” (although the latter was a bit too corny) it was clear to me that we would see more beautiful things of this frail young lady.  And “How I live now” can surely be placed in the gallery of magnificent and successful films. Despite the somewhat depressing subject.

The consequences of nuclear war.

It’s been a long time since an oppressive feeling crept over me while watching a movie. A feeling because you realize that what is shown, isn’t entirely fiction and still hangs above us like the sword of Damocles. I had the same feeling 30 years ago after seeing “The Day After“. A disturbing film about the consequences of nuclear war and the terrible postwar state. We were in the middle of the “cold war” and it seemed as if the two most mighty countries had their whole arsenal of nuclear missiles aimed at each other. And a global nuclear war could break out any minute because of a nervous reaction. They had (and no doubt that this is still the case) a supply of nuclear warheads that was enough to blow up planet earth a gazillion times and turn it into space dust. And we earthlings too of course. After seeing “The day after” the first thing that came into my mind was: “Shit, I hope it’ll never come to that ….” In today’s society, this threatening situation is not that acute anymore and is no longer a hot topic in the news. That doesn’t mean it could never happen.

While watching “How I live now“, the exact same feelings came back. The “Shit, let’s hope this never becomes reality …” kind of reaction. And also because of the impression that you are going through exactly the same events. As if you were in the midst of those who were going through that hell. And although it’s a gray and grim view of the future, this film was a sight for sore eyes. The storyline is perfect because of the sobriety of images. No deliberately added sensational images of bombardments or mutilated victims. Only the subtle used images of a shock wave, the threatening atmosphere during the action of the soldiers and the brutal terror that war brings. All this in an artistic framing so it was sometimes hard to believe that there are so many terrible things happening in a short distance. A beautiful morning with a tasteful view of the surrounding countryside made the ugliness of the upcoming war disappear. Superb.

In addition to the photographic qualities, there was the sublime cast with Saoirse Ronan up front. The transformation of a theatrical, snooty, pampered, alternatively looking and pretty crazy girl into a friendly, frank, visibly enjoying life and loving girl, was fairly predictable. The rendition of Ronan (Daisy) was of an exceptionally high level. Her natural beauty, her confident attitude, and her intense shining eyes was an add-on to the sublime acting. Her performance is admirable and credible. A masterly portrait of a tormented teenager with enervating, whining voices in her head and a load of self-pity she’s carrying (probably the result of the traumatic experience as a baby). The rebellious and furious temper that slowly fades away and makes room for a lovely, timid girl who discovers the joy of life again. And in the end, she becomes a savior who knows quite a bit about “Survival” techniques to watch over her little niece. Even the love relationship (In a way it’s a forbidden relationship) was subtly addressed and wasn’t really annoying. It served for them as the last straw to hold on to.

Others sparkled as well.

But not only Ronan sparkled in her role. The other young actors were perfectly cast and played their part realistically. The movie started rather slow and unclear. But once Daisy joins her distant family and experiences together with her cousins the daily grind of life in the countryside, the movie shifts into a higher gear. Harley Bird (Piper) is astonishingly good for her age. A kind of an English Shirley Temple on a survival trek. And Tom Holland (Isaac) has that innocent boyish look all the time. Splendor Performance.

“How I live now” is not about showing spectacular images and action-packed scenes during a war. It’s about the aftermath of such a war with sometimes harrowing situations in which survivors end up. The daily struggle to survive and how replaceable we are as civilians in the hands of a reigning government apparatus. Despite the austere images, this movie is at times still quite thrilling and cruel. An issue such as this impresses me more than movies about a deadly epidemic, zombie situations or another physical catastrophe. Despite the total lack of solid information so you understand the situation much better, the message is clear: love conquers all obstacles and as long as you focus on what is important, nothing is impossible to achieve. Let’s hope that common sense continues to prevail in our society! Watching “How I live now” is worthwhile.