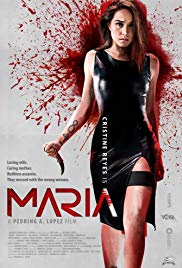 A Filipino female assassin quits and fakes her death. Her old boss finds out after she's gotten a family. He tries to kill them. She responds.

John Wick had a good reason to make things difficult for his former boss. They liquidated his cute dog and stole his car. In the movie “Polar“, Duncan Vizla’s retirement savings were compromised. In this Filipino revenge film, Maria (Christine Reyes) leaves a trail of death and destruction because her former employee has murdered her family. You’d start a killing spree for less. What does she have in common with Wick and Vizla? She’s also a retired assassin who has turned her back on the violent life she led. So expect action-rich and extremely violent scenes that are performed according to an excellent choreography.

Maria (or Lilly in her previous life) didn’t just simply retire. She went off the grid in a devious way when she had a crisis of conscience at her last job and refused to butcher an innocent woman and her daughter. Instead, she shot Kaleb (Germaine de Leon), her lover back then, through his kneecap and disappeared forever. That is until the same Kaleb notices her when they are making preparations to kill some governor. From then on the hunt for her is opened. The result of this manhunt is the death of her current husband and her lovely little daughter.

The sweet taste of revenge.

Well, “Maria” isn’t really innovative. Countless revenge films have been made recent years (such as “I spit on your grave“, “Revenge“, “The Equalizer” and of course “John Wick“). Don’t expect a complicated and well-thought-out story in this Philippine action film. The film is actually fairly straightforward. And in the end, it’s only the tough confrontations what’s important in such action films. In “Maria” however, they tried to fill the voids with irrelevant sordid stuff. Every once in a while cheaters and inconvenient witnesses are tortured and massacred. So, the most positive thing you can say about this film is that the fight scenes look slick. The rest, on the other hand, was sometimes too bad for words.

Let’s start with the part that annoyed me immensely. I didn’t mind it to be a Filipino film. Even though I didn’t understand a thing. And those who know me a little bit, know that I hate reading subtitles constantly. I’ve made peace with that. But why did these Filipino conversations have to be alternated with an English sentence? It was as if they had taken the dubbing into their own hands. And it wasn’t just this bilingual nonsense that was annoying. The sound of pronunciation was also toe-curling. It was as if all those Philippines suddenly sounded like Andy Kaufman from “Taxi”. Next, let’s talk about the male actors. Some of them are guilty of theatrical overacting (especially KC Montero masters in this). And I don’t know if this is a tradition among Filipino gangs, but I thought it was fairly bizarre that the male protagonists had female furies to do the dirty work. Although I have to admit those ladies could stand their ground without any problems.

Furthermore, “Maria” is again filled with well-known clichés that are used over and over again in action flicks. The hard rock music. Again stupid gangsters rushing forward like sheep to the slaughter. Of course, a nightclub scene had to be included. Whistling blades. Cracking bones. And the sound effects of hard fist-punches reminded me nostalgically of the better Terence Hill & Bud Spencer films. It was like a Filipino “John Wick” persiflage. Only the charisma and the natural coolness of Keanu Reeves were missing. And finally, I found some scenes were overly stretched (such as the flashbacks).

All in all, “Maria” is no more than a B-film with a simplistic storyline and moderate acting. Are you a fan of solid fists and footwork then you will certainly enjoy yourself here. And for those who appreciate exotic women, these exotic beauties look really pretty and are certainly no kittens to tackle without gloves. Why they have to walk around all the time in a kind of aerobic outfit is a mystery to me. And Maria’s posing like a model in the rain after the ultimate fight, I found hilarious. Fortunately, Denzel Washington didn’t do something similar in “The Equalizer“. That would look rather ridiculous!