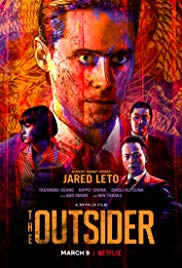 An epic set in post-WWII Japan and centered on an American former G.I. who joins the yakuza.

When you dishonor your boss

and you want to show remorse,

you give your finger.

I see you’ve got all your fingers.

Even though I don’t have any affinity with Japanese culture as such and mostly ignore Asian films, I couldn’t resist giving “The Outsider”  a chance. Not only because of the fact that Jared Leto is playing in it (a colorful actor who reminds me of Johnny Depp and because of his role as The Joker in “Suicide Squad” can join the club of quirky Hollywood actors), but also because of the central theme of the Yakuza families. I wondered if this could be another successful Netflix original.

I don’t know much about Japanese culture. Only the term Yakuza is known to me. You can see it as the Japanese version of the Italian Mafia. The only difference with their Italian counterparts is that the Yakuza members are an epitome of inner calmness and adopt an intimidating attitude by using ice-cold, angry looks and a threatening, non-loud tone during their conversations. Quite different from the Italian mafia members, who usually want to make an impression by shouting and intense gesticulating while making their point, after which a rival gets a concrete pedestal and they dump him in some Italian river. So I prepared myself for a Japanese-colored “Godfather“-like movie.

The first thing you could criticize is the pace of the film. “The Outsider”  is extremely slow at times, indeed. But doesn’t that suite the entire Japan concept? After all, members of the Yakuza families themselves use a certain pace in their conversations by using impressive silences between sentences. On the one hand to show respect. On the other hand maybe also to increase the impact of used words. Have you ever seen a Geisha passing by? They aren’t exactly a paragon of speed. And to be honest, if this movie had lasted an extra hour, I wouldn’t have minded that either. And that’s because of the other positivities you can find in “The Outsider” .

A white Yakuza member. Possible or not?

First of all, I thought the acting of the entire cast was marvelous on all fronts. The mix of authentic Japanese who speak their own language for most of the film instead of constantly using broken, bad-sounding English and the acting of Jared Leto was simply stunning. How Nick Lowell ended up in an Osaka prison, remained a mystery to me. He’s the only English-speaking prisoner and is surrounded by mainly Yakuza gang members. Rescuing the Yakuza Kiyoshi (Tadanobu Asano) from a perilous, life-threatening situation gives him a ticket to freedom. And that’s when he chooses to gradually integrate into the Yakuza family. Not an easy task since the members of this Yakuza family aren’t really hospitable and are rather resentful towards white strangers (a Gaijin). However, I wonder if, in reality, a Westerner would get a chance to be included in such a Yakuza-family. I doubt it.

The used cinematography in “The Outsider”  was also generally sublime. Maybe a little too dark at certain moments, such as the prison scenes, for example. But in general, the setting in this post-war Japan is really impressive. A mysterious metropolis with dark, narrow alleys, clubs where Sumo wrestlers compete and smoky night clubs. The only thing that tries to break through this darkness is the sometimes bright neon lights.
Expect some violent scenes too. You can’t do without it in a gangster movie, I guess. There are quite a few victims. Lots of gunshots and knives carving around. Even a self-mutilation scene where a few fingers are sacrificed isn’t missing.

The acting of Jared Leto was superb.

My limited knowledge of Asian film material and Japanese customs made sure everything came across as fairly authentic to me. Others, who immersed themselves in this matter, may have noticed imperfections. And perhaps the content has all been done before. I even read somewhere that there was a lot of fuss about casting Jared Leto. And the term “whitewashing” came up. Didn’t we have the same discussion about Matt Damon’s contribution to “The Great Wall“? By the way, I thought Jared Leto was suitable for this role as the silent (probably because he doesn’t speak the language), cold-blooded and emotionless Nick. He reminded me a bit of Keanu Reeves in “47 Ronin“. Only the speed with which he was accepted in the Shiromatsu Yakuza clan, seemed greatly exaggerated. And the emotional relationship between Nick and Miyu (Shioli Kutsuna) felt like a mandatory item.

But just as I scoured the internet for information about “The Zodiac Killer” after watching the movie “Zodiac“, I couldn’t resist consulting Wikipedia about the Yakuza phenomenon. That means this film also left an impression. If slow crime movies about the Mafia interest you, and this in a Japanese environment, then I can definitely recommend this movie to you.

You can watch The Outsider on Netflix now!