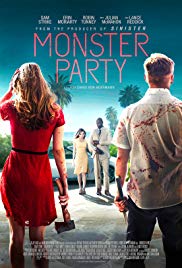 Three young thieves infiltrate a mansion dinner party secretly hosted by a group of recovering murderers for the social elite.

won’t know what hit them.

Perhaps it would be better that future burglars screen the residents of the targeted house first and then see if there’s something to get. That’s certainly a lesson those young burglars have learned in the movie “Monster Party“. After seeing the mansion they’re planning to rob, they’re convinced that the loot will be big enough. What they didn’t expect was an utter crazy company at dinner with a fairly dark secret. A kind of AA meeting. But not the “A” of alcohol but the “A” of aggression. And this with a capital A.

My expectations weren’t high at all. I thought the movie would be a second-class slasher once again. And what bothered me the most about the film, was the fact that it’s a combination of humor and horror. And let that now be the combination I least believe in. While watching most of these types of horrors I always get the feeling that neither of the two genres is completed. Most of the time the humor is so lousy that I can’t even smile. And at the same time, the horror story is usually only moderately worked out. Well, a person can be wrong. In the case of “Monster Party” I was completely wrong. Both the cynical, black humor (the kind of humor I like the most) and the bloody and creepy parts weren’t that bad.

It certainly is a hornet’s nest.

When the three juvenile criminals Dodge (Brandon Michael Hall), Casper (Sean Strike) and Iris (Virginia Gardner) choose this larger target where they can demonstrate their burglar’s talent, they aren’t realizing that they are plunging into a hornet’s nest. The Dawsons are a wealthy family who organizes a dinner party at their large country house and Iris happens to work there as a waitress for the appointed catering company. The three youngsters all have a good (financial) reason to take the risk. From the outset, you have this feeling that the members of this company aren’t functioning normally.

Just wait till the madness starts.

Have you watched the trailer already? Well, then you already know how it unfolds. Impatient gore fans most probably will be waiting nervously for that moment when the madness starts. And that waiting will be rewarded. Not only because of the bloody situations (and they were reasonably inventive as to how some were slaughtered). But also because of the extraordinary acting performances. Especially Kian Lawley, as the crazy son Elliot whose gaze is a mix of madness and sadism (and he enjoys it), and Julian McMahon as host Patrick whose ultra-calm appearance is really nothing more than a masquerade. Virginia Gardner also acts excellently at specific moments. And for the first time, I even thought that these bloody events were amusing. And there’s more. Director Hoffman has a little surprise in store. Normally I would say this type of surprise was a bit exaggerated. Not now. I thought it was a nice contribution to the movie.

I’m pretty sure “Monster Party” was made with a micro-budget. The number of locations in this film is fairly limited and the massacres usually take place off-camera. But the main characteristic of a low-budget film wasn’t present here. Mostly the acting-part is rather tedious and crappy in low-budget movies. But in “Monster Party” the acting is far from amateurish or toe-curling bad. On the contrary. And they acted with noticeable pleasure. Cinematographically it looks slick. The pace is just right. And there’s even a feeling of tension as the plot unfolds. In short, a noteworthy film you definitely don’t need to avoid. Watch it when you get the opportunity.