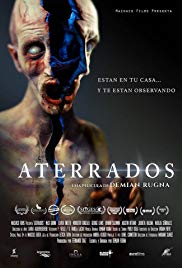 When strange events occur in a neighborhood in Buenos Aires, a doctor specializing in the paranormal, her colleague, and an ex police officer decide to investigate further.

They were human voices.

What did they tell you?

That they were going to kill me.

In Argentinian, they say “Aterrados“. It’s “Terrified” in English. And yes, some will be terrified while watching this masterful horror. I can’t really describe why it is such an excellent horror. However, there are no earth-shattering new ideas being introduced. If you look at it as a whole, it seems like a fusion of different topics from other horror films. Take specific scenes from “[Rec]“, “The Conjuring” and “Paranormal Activity“. Shake these all up a bit. Dip it all in an Argentinian sounding sauce. And you get the end product “Aterrados“. The biggest difference with the random list of horror films (with possessed houses as the central subject) is that “Aterrados” isn’t about an isolated case. No, it isn’t. The terrifying phenomena occur in several houses at the same time.

Not an ordinary horror.

I had never heard of this movie. It’s a coincidence that I came across it while searching through the offer of horror-movies on my Netflix account. I wasn’t really expecting much of it. And when one of the women in the film started to complain about voices she heard in the sink, I was already afraid that it would be such an absurd film as “Deep Dark“. Well, I was really wrong about that. Before I knew it, I was watching such a shocking scene, that I couldn’t help using the rewind function. Magnificently portrayed and provided with sound effects that appeal to the imagination. You hear, as it were, the smashing of limp, dead flesh including accompanying sounds of shattering bones. At that moment I realized that “Aterrados” wouldn’t be just an ordinary horror. And believe me, from that moment on it’s a rollercoaster of shock moments and paranormal events.

Once again no explanation.

However, don’t expect an explanation about the events. Or an explanation of the creatures that make life hard for both Clara (Natalia Señorales), her husband Juan (Agustin Rittano), and neighbor Walter (Demián Salomón). When the three scientists start investigating the houses to find evidence of paranormal phenomena, they come up with a not too meaningful explanation. Something with dimensional surfaces, slices of orange, and water. It won’t really make you any wiser. The fact that the events take place at different locations was an asset. You can see it as the three “The Conjuring” films, each with their own haunted house, compressed into one film. This provides the necessary variety in terms of shock moments and creepy entities popping up.

It’ll scare you to death.

Anyone who has already seen a huge amount of horrors about paranormal activities and haunted houses (“Poltergeist“, “Paranormal Activity“, “The Amityville Horror“, “The Entity” … Too many to mention) won’t be blown away by this film. And this because the movie resides in familiar territory. But the way in which it’s portrayed and the subtle build-up of tension can certainly be called commendable. The pace is generally very high (except it slows down a bit halfway) and the jump scares follow each other at rapid speed. And it’s especially the timing that is just perfect at moments (the subtle little movement of the boy at the dinner table, for example). “Aterrados” is a spooky story, full of terrifying images and a creepy atmosphere. Perhaps it is narratively difficult to follow and you’ll probably Won’t really know what’s going on (Is it about paranormal events or simply things that everyone experienced because of a certain fear?). And perhaps you might not really like the open end. But in the end, “Aterrados” only tries to accomplish one thing. And the film certainly succeeds in that task. And that is, making sure that you are sitting in front of your screen scared to death. I bet you won’t dare to look under your bed that same evening!

You can watch Aterrados on Netflix now!