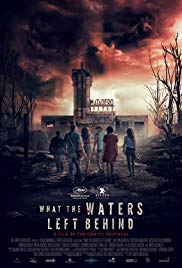 The plot revolves around a group of young people that take a trip to the ruins in order to film a documentary about Epecuen. Ignoring the warnings, and after a brief tour, they get stranded in the abandoned village. Contrary to what they thought, they begin to realize that they are really not alone.

Epecuen looks like the scene from a movie.
A horror movie…

The Onetti brothers could have made it easy on themselves by dubbing the movie “The Texas Chainsaw Massacre” to an Argentine version. Because to be honest, this movie “Los Olvidados” is almost a perfect copy of this legendary film. Only the location and the freakish characters are different. The whole story is situated in Argentina. More specifically in Villa Especuén. A town in the province of Buenos Aires that was completely flooded by a salt lake in 1985 after a period of heavy rainfall. The images used are therefore authentic. Even the slaughterhouse (Matadero) that can be seen in this film, is a lonely witness to the terrible disaster. Yet another advantage for the filmmakers. They could save seriously on the budget for the scenery.

It’s not a complete failure.

Saying that “Los Olvidados” is a complete failure, is also a bit exaggerated. Admittedly, it certainly won’t win a prize for originality. Literally, all items that are necessary to make a film similar to that of “The Texas Chainsaw Massacre“, were checked off on a list. First, you have the ramshackle van, filled with a bunch of people on their way to Especuén to make a documentary about this lost city. The fact that their cumulated IQ most likely won’t exceed that of a hamster, was to be expected. And of course, there are two bimbos who wouldn’t be out of place on one or another Argentine street corner. They take care of the erotic part. Obviously, a tiny jeans pants is mandatory in this case.

Furthermore, there’s an annoying director. Then there’s a woman who witnessed the disaster at first hand. She seems to be the smartest of them all. Next, you have a serious guy who apparently joined reluctantly and is constantly scribbling in a sketchbook. And finally, there’s a brown-bronzed, muscular young macho who’s driving the van and constantly flirts with the director’s girlfriend. As soon as this gang has been proposed, you can start guessing who will survive the bloodbath.

You don’t have to wait long before the lugubrious figures are introduced. They live in a dilapidated, filthy gas station and their appearance speaks volumes. A mixed bag of strange folk who look unkempt and insane. That these left behind, uncivilized figures will cause problems is plain as day. And from then on, this film transforms from an easy going road-movie to a bloody slasher. And what’s necessary for this type of film, certainly isn’t missing. And these are gruesome, distasteful images in which sharp objects and accessories from a real slaughterhouse are used with enthusiasm. Sure, the used images aren’t all exaggerated or nauseating. Mostly it’s simply brutal and “right in your face” violence.

Unfortunately, the brilliantly shot scenes of Especuén and the bloody fragments aren’t enough to make this a great film. The editing of this movie was sometimes very confusing. It seemed as if short scenes were cut out. As if the censorship committee had intervened. There were also meaningless scenes that only served as filler. Like the girl dancing in a bikini. It looked like an amateur-made video clip of a local Argentine hip-hopper. The plot twist at the end was also extremely predictable. And the images made with a drone are also something I’m sick of. It surely produces some hallucinatory images. But nowadays this is used in films time and time again.

All in all, this film is a must see for the fans of this particular horror genre. The acting wasn’t shockingly bad. The insane family members were really frightening at certain times and acted in a schizophrenic, psychotic way. Especially the head of the family acted completely disturbed. And I got cold chills from the old woman. Also the look of the place where the family leads their life was successful. A frenzied place full of filthiness and blood-curdling props. Unfortunately, that’s the only thing I will remember from this average film. If the makers had put in more Argentine quirkiness, the end result might be much better.